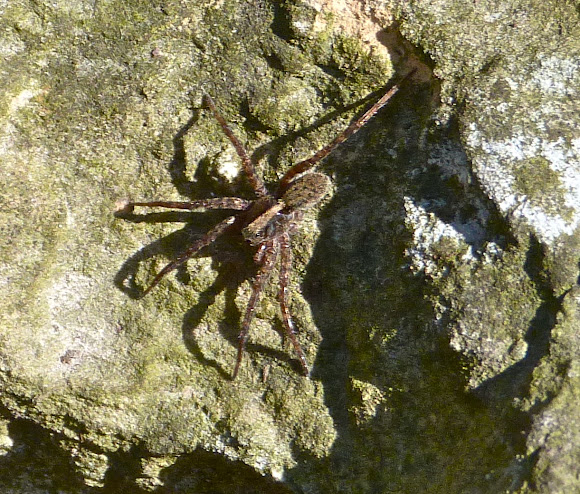 The Carolina wolf spider is usually regarded as the largest of the wolf spiders found in North America. The body length of females is typically 1" and the body length of males is typically around 3/4". Members of this species are known to live in burrows that they dig. The undersides of the cephalothax and the abdomen are both solid black.Their large eyes reflect light well, so that they are sometimes hunted at night using a flashlight. While the appearance of these spiders may seem rather forbidding, they are not inclined to bite. They flee anything larger than themselves, and generally will bite humans only if they feel threatened and are unable to escape. They do have large fangs that can create mechanical injury to other creatures, but their venom is not regarded as medically significant. A bite by one of them is sometimes described as about as painful as the sting of a bee or wasp. These spiders are large enough to easily capture grasshoppers, crickets, and other such large agricultural pests. They are ambush predators that may wander about after dark in search of prey. They are poor climbers, so that in nature they generally remain on the ground, hidden under natural shelters such as the edges of rocks, or in their own burrows.

This little guy was a juvenile measuring just 1 cm.