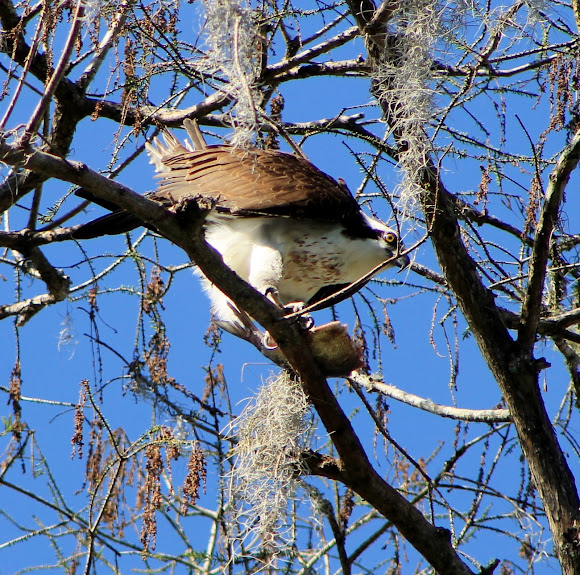 The Osprey (Pandion haliaetus), sometimes known as the sea hawk, fish eagle or fish hawk, is a diurnal, fish-eating bird of prey. It is a large raptor, reaching more than 60 cm (24 in) in length and 180 cm (71 in) across the wings. It is brown on the upperparts and predominantly greyish on the head and underparts, with a black eye patch and wings. The Osprey tolerates a wide variety of habitats, nesting in any location near a body of water providing an adequate food supply. It is found on all continents except Antarctica although in South America it occurs only as a non-breeding migrant. As its other common name suggests, the Osprey's diet consists almost exclusively of fish. It has evolved specialised physical characteristics and exhibits unique behaviour to assist in hunting and catching prey. As a result of these unique characteristics, it has been given its own taxonomic genus, Pandion and family, Pandionidae. Four subspecies are usually recognised. Despite its propensity to nest near water, the Osprey is not a sea-eagle.

The Osprey has a worldwide distribution and is found in temperate and tropical regions of all continents except Antarctica. In North America it breeds from Alaska and Newfoundland south to the Gulf Coast and Florida, wintering further south from the southern United States through to Argentina.[24] It is found in summer throughout Europe north into Scandinavia and Scotland, though not Iceland, and winters in North Africa.[25] In Australia it is mainly sedentary and found patchily around the coastline, though it is a non-breeding visitor to eastern Victoria and Tasmania.[26] There is a 1000 km gap, corresponding with the coast of the Nullarbor Plain, between its westernmost breeding site in South Australia and the nearest breeding sites to the west in Western Australia.[27] In the islands of the Pacific it is found in the Bismarck Islands, Solomon Islands and New Caledonia, and fossil remains of adults and juveniles have been found in Tonga, where it probably was wiped out by arriving humans.[28] It is possible it may once have ranged across Vanuatu and Fiji as well. It is an uncommon to fairly common winter visitor to all parts of South Asia,[29] and Southeast Asia from Myanmar through to Indochina and southern China, Indonesia, Malaysia and the Philippines

Fish make up 99% of the Osprey's diet.[31] It typically takes fish weighing 150–300 grams (5–10 oz) and about 25–35 centimetres (10–14 in) in length, but the weight can range from 50 to 2000 grams (2–68 oz). Virtually any type of freshwater fish in that size range are taken. Ospreys have vision that is well adapted to detecting underwater objects from the air. Prey is first sighted when the Osprey is 10–40 metres (32–130 ft) above the water, after which the bird hovers momentarily then plunges feet first into the water.[32] The Osprey is particularly well adapted to this diet, with reversible outer toes, sharp spicules on the underside of the toes,[33] closable nostrils to keep out water during dives, and backwards-facing scales on the talons which act as barbs to help hold its catch. Occasionally, the Osprey may prey on rodents, rabbits, hares, amphibians, other birds,[34] and small

Thanks , these guys are always a treat to spot and this guy was rather interesting, lol he was posed like this because he was going to the bathroom, thankfully i was not the recipient of his droppings, lol