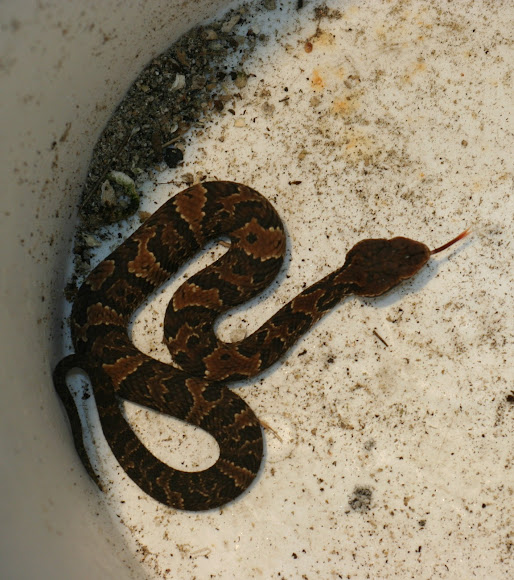 Agkistrodon piscivorus is a venomous snake, a species of pit viper, found in the southeastern United States. Adults are large and capable of delivering a painful and potentially fatal bite. When antagonized they will stand their ground by coiling their bodies and displaying their fangs.[2] Although their aggression has been exaggerated, on rare occasions territorial males will approach intruders in an aggressive manner.[3] This is the world's only semi-aquatic viper, usually found in or near water, particularly in slow-moving and shallow lakes, streams, and marshes. The snake is a strong swimmer and will even enter the sea, successfully colonizing islands off both the Atlantic and Gulf coasts. The common names for the species include variants on water moccasin, swamp moccasin or black moccasin; also cottonmouth, gapper, or simply viper.[4] Many of the common names refer to the threat display, where this species will often stand its ground and gape at an intruder, exposing the white lining of its mouth

After a week of walking around the campsite of everglades national park in flipflops, on our last evening we encountered this visitor in the ladies restroom. We carefully relocated it. Then encountered another shortly after. I consider myself both idiotic for my ignorance and indeed lucky I did not step on one of these venomous vipers. The snake was not injured and relocated a distance away from the campgrounds.

Wow! Yes, very lucky for you not to have stepped on one! It is beautiful, nice photo's!

Wow! What a beauty. A little freaky to encounter in the restroom, though.