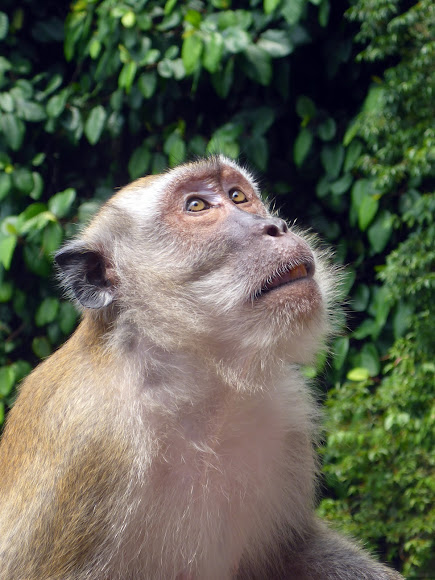 Long-tailed macaque - also called crab-eating macaque - are native to southeast Asia. They are very numerous in the hills around Batu Caves, Malaysia, where these photos were taken. Around the Batu Caves, I observed them to be very sneaky, thieving and relatively agressive due to their frequent exposure to tourists and human consumables. They especially have a weakness for drinks in cans and bottles (which they will chew until they can access the liquid - either from the floor or directly from the container, cf. video), flower ornaments and plastic bags (which they will steal and rummage through from a safe distance).

Your photo will now be highlighted on November 3rd, instead of October 31st. Sorry for the confusion. Thanks again for contributing to the Great Nature Project!

Thank you! Your photo will be highlighted on October 31st. Afterwards, you’ll be able to see your photo for about a month in the Pic of the Day Collection (www.greatnatureproject.org/collections/1...). Thanks again for contributing to The Great Nature Project!

Congratulations! We would like to highlight this photo as National Geographic’s Great Nature Project Pic of the Day! It will be featured in the lower left corner on The Great Nature Project website (www.greatnatureproject.org), as well as on NG Education Twitter, Facebook, and Google+ accounts.

We will attribute this photo to you by using your username, JasmineJ. Once we hear back from you (either here or via email to GreatNatureProject@ngs.org), we’ll let you know which date we’ll highlight your photo. Thank you for sharing your observations with The Great Nature Project!