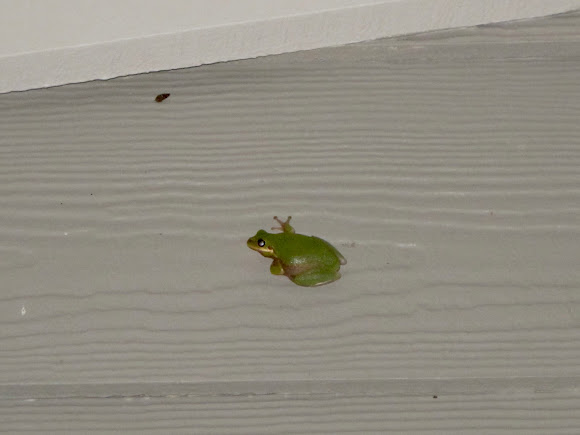 A common southeastern tree frog frequently found near porch lights. Insects are attracted to the lights and the frogs will wait nearby and snack on the bugs as they fly by. This particular frog is sometimes difficult to distinguish from similar species - however, it can be identified by the lack of a white stripe on its sides, the lack of yellow/orange patches on the legs and the smooth skin on their back. This particular fellow was in a group of about 25 frogs, scattered around the walls of the building, all congregated near outdoor lights.

Like all frogs, these tree frogs prefer habitat with plenty of moisture and food. They can be found in woodlands, marshes, near lakes or ponds, or in the areas surrounding streams. This one was found at the Joseph W. Jones Center near Newton, GA

Their calls supposedly sound like a squirrel chattering, hence the name