This cap was ageing and so was slightly brittle along the margins - a characteristic of this fungus. "/>
Guardian Nature School Team Contact Blog 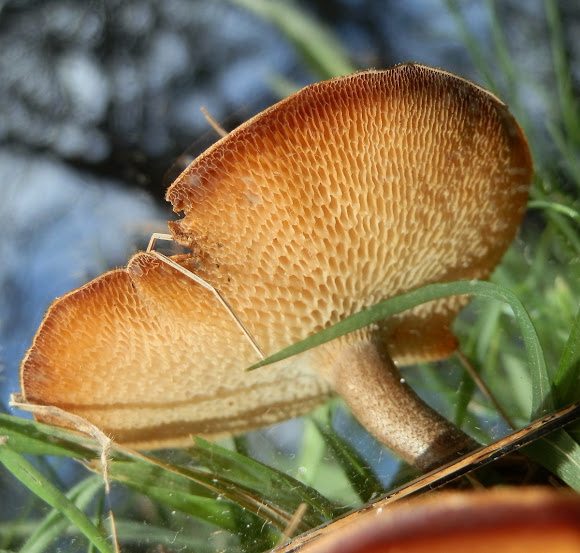 A flat capped fungus about 45 mm wide. The cap centre was depressed and the cap was covered with small smooth shiny brown scales. Cap margin had a fine trimming of hairs.(pic5)
The slightly decurrent very pale underside showed what is aptly described as "coffin-shaped" pores (pic 2). The stipe was smooth and a uniform grey colour (pic 3).
This cap was ageing and so was slightly brittle along the margins - a characteristic of this fungus.

Spotted growing both singly and in small clumps on grassy ground, probably from subterranean wood. The area had mixed native trees and grass - national park.

Family: Polyporaceae
This genus of fungi ( Polyporus) is used for the production of single-cell protein used as substitutes in protein-rich food for humans and animals

Thanks Jae, Mark and Kathleen. Ha, ha Kathleen, sorry to disappoint you - I did not have to lie down to take the under shots (and I would not dare because this place is known to have snakes about) I used a mirror, a trick I read somewhere. This way you don't have to work too hard or destroy the mushroom. Unfortunately you get a bit of "ghosting" in your photos but they come out OK mostly.

Beautiful fungus photos! I enjoyed thinking of you lying on the ground taking the ones of the underneath side of the cap:) Thanks for sharing.

Nice first pic.
The grass tie-down has deformed it but that makes it different to most.