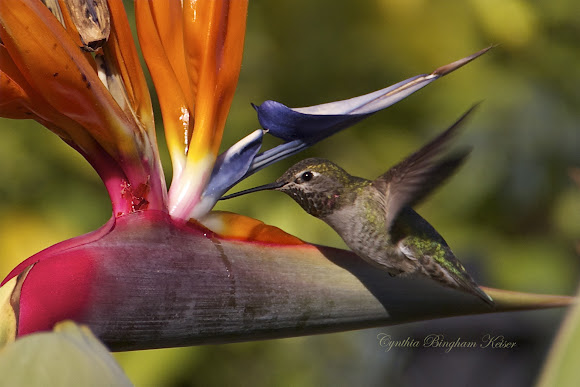 Green and gray hummingbird with a red to pink patch on the throat. The hummingbird is the only bird known to be able to fly backwards. This makes it Wildlife with Innovative Defense to be able to flee. "Anna's Hummingbird is 3.9 to 4.3 inches (10 to 11 centimeters)long. It has a bronze-green back, a pale grey chest and belly, and green flanks. Its bill is long, straight and slender. The adult male has an iridescent crimson-red crown and throat, and a dark, slightly forked tail. Anna's is the only North American hummingbird species with a red crown. Females and juveniles have a green crown, a grey throat with some red markings, a grey chest and belly, and a dark, rounded tail with white tips on the outer feathers." - Wikipedia

Bird of Paradise and Bottlebrush bush in backyard. "Anna's Hummingbirds are found along the western coast of North America, from southern Canada to northern Baja California, and inland to southern Arizona. They tend to be permanent residents within their range, and are very territorial. However, birds have been spotted far outside their range in such places as southern Alaska, Saskatchewan, New York, Florida, Louisiana and Newfoundland." - Wikipedia

This species qualifies for Wildlife with Special Adaptations with its sonation during display. "Unlike most hummingbirds, the male Anna's Hummingbird sings during courtship. The song is thin and squeaky. During the breeding season, males can be observed performing a remarkable display, called a display dive, on their territories. When a female flies onto a male's territory, he rises up approximately 30 metres (98 ft) before diving over the recipient. As he approaches the bottom of the dive the males reach an average speed of 27 m/s, which is 385 body lengths per second. At the bottom of the dive the male travels 23 metres per second (51 mph), and produces a loud sound described by some as an "explosive squeak" with their outer tail-feathers." - Wikipedia

I agree NaturalList! Thank you for the comment, Diane :)

Two of my very favorite things in this world, the hummingbird and the Bird-Of-Paradise. Beautiful captures.

Thank you Seema, thundermak and Sergio!

Emma, that's wonderful. I'm sure you'll get some great photo's of them soon!
Thank you Sachin, dedes and Dixie!

Cindy,to my utmost delight we had a rufous humming bird at our feeder today. it was around for quite some time.
A feeder is a good idea if you do not have one.
Unfortunately I could not get a picture. We also have white tailed kites around. I also missed the pics of a red breasted Sap Sucker.:(

Hi Emma, we've had them here most of the winter. They're so much more weary of people than Anna's! At least those in my yard :) I hope to get a good photo of one soon.

Cindy ,Keep your eyes open for the Rufous hummingbird. There are tons of them coming in.I saw one briefly and i was totally awestruck. it is truly rufous!!

Makes sense,the hummingbird is sipping nectar from the base of the blue floret in the bird of paradise.

Female parts of a flower have a carpel, which includes a pistil that produces seeds, In the pistil are a stigma that holds pollen grains, a style that pollen grains grow through, and an ovary where seeds wait for pollen and grow after pollination. This is the part of the plant that holds nectar.

Hi Emma, Bottlebrush do produce nectar. Here's some info on the plant: http://www.anbg.gov.au/callistemon/index...