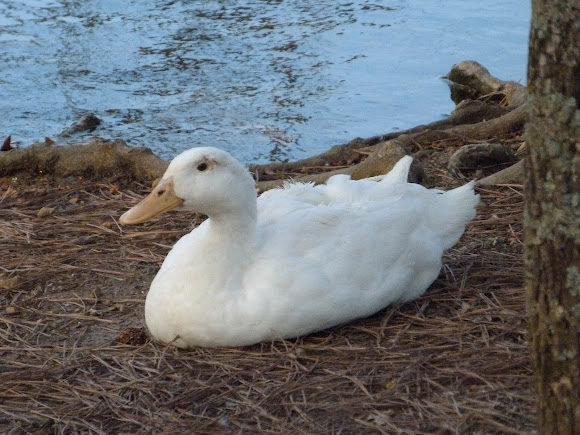 Pekin duck is a breed of domesticated duck used primarily for egg and meat production. It was bred from the Mallard in China. The ancestors of those ducks originated from the canals which linked waterways in Nanjing and originally had small bodies and black feathers. With the relocation of the Chinese capital to Beijing, supply barge traffic increased in the area which would often spill grain on which the ducks fed. Over time, the ducks slowly increased in size and grew white feathers. By the Five Dynasties, the new species of duck had been domesticated by Chinese farmers. In 1873 nine ducks were exported from China to Long Island, New York in the United States and the animals and their meat are sometimes referred to as "Long Island duckling". It is the most popular commercial duck breed in the United States, although some farming has since relocated to Indiana from Suffolk County, New York. Around 95% of duck meat consumed in the United States is Pekin duck.

I can tell it is moulting because of the way in which the tail and end feather are the soft feathers. I grew up on a farm raising poultry mostly ducks and chickens. I have done a lot of research on domestic duck breeds that how i could tell it was a Pekin.

Seema, the only white ducks I know are the Aylesburys that are very common in England, but they are about twice the size & have a much longer neck.

Nice to know the identity....I knew these white variety of ducks only as a breed of domestic duck..

Thank you for the ID Rachel!

RachelanneRaeVanderWerf,how can you tell if its moulting?

It is a Pekin. It looks like it is moulting so I cannot tell if it is male or female.

It was a pale dull yellowy pink!
This was about mallard sized - much smaller than the aylesbury ducks I am familiar with.

Pekins have orange bills and Aylesburies have pink bills. I think this is one of those two (maybe even a hybrid of both).
What color is the bill? (I'm colorblind).