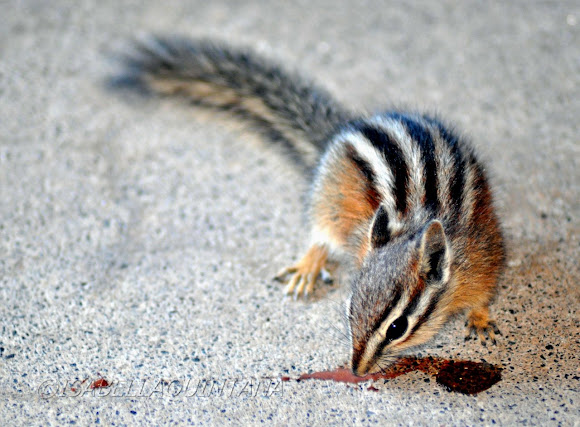 The species is found in a variety of habitats including mixed deciduous and coniferous forests, boreal forest, and sagebrush plains. ~ Wikipedia

They have three dark lines with white in between along their face and five black stripes with brown edges and white in between along their back. They are grey and reddish-brown on the sides and greyish white on their underparts. Their tail is orange-brown. These animals are active during the day and eat seeds, berries, nuts, fruits and insects. Predators include hawks, owls and mustelids. They breed in early spring. Females produce one litter usually of 5 or 6 young. They store food in an underground burrow, where they spend the winter. These animals go into a state of torpor for extended periods of time, but do not hibernate. ~ Wikipedia

The chipmunk is so cute

nice photos...I love chipmunks...except when they get into your food when camping ;)

Me too, the ice cream was delicious!
thank you for the comment, Gerardo Aizpuru!

Sachin Zaveri - 2 days ago - Nice spotting what is there over floor,
During a visit to Yellowstone, while taking a break we were eating ice cream. There was ice cream and a few crumbs on the floor from a previous group of people that the chipmunk found on the ground.

Nice spotting what is there over floor,

Isabella, he is adorable! Nice series of photos!

What a cutie!
Welcome to Project Noah Isabella!