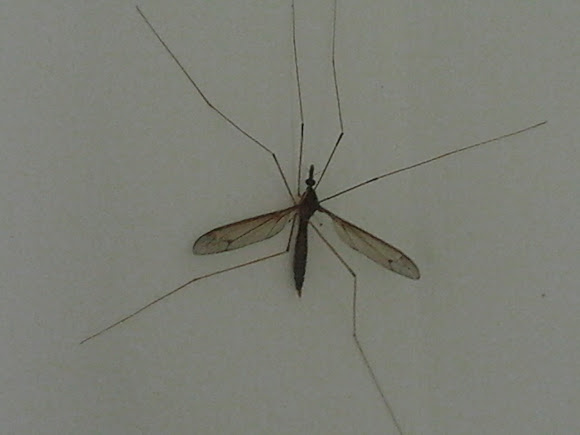 A crane fly is an insect in the family Tipulidae. Adults are very slender, long-legged flies that may vary in length from 2–60 millimetres (0.079–2.4 in) though tropical species may exceed to 100 millimetres or 3.9 inches. In the United Kingdom, Ireland, Newfoundland and Nova Scotia they are commonly referred to as daddy longlegs, but this name can also refer to two unrelated arthropods: members of the arachnid order Opiliones (especially in the United States and Canada) and the cellar spider Pholcidae (especially in Australia). The larva of the European Crane Fly is commonly known as a leatherjacket. These larvae can cause damage to lawns by feeding on the roots of grass plants. Numerous other common names have been applied to the crane fly, many of them more or less regional, including mosquito hawk, mosquito eater (or skeeter eater), gallinipper, and gollywhopper. At least 4,256 species of crane flies have been described, most of them (75%) by the specialist Charles Paul Alexander. This makes Tipulidae one of the largest families of Diptera (although smaller than Limoniidae, one of the other extant families of crane flies). (taken from wikipedia)

Despite their common names, as adults, crane flies do not prey on mosquitoes, nor do they bite humans. Some larval crane flies are predatory and may eat mosquito larvae. Adult crane flies feed on nectar or they do not feed at all. Once they become adults, most crane fly species exist as adults only to mate and die. Their larvae, called "leatherjackets", "leatherbacks", "leatherback bugs" or "leatherjacket slugs" because of the way they move, consume roots (such as those of turf grass) and other vegetation, in some cases causing damage to plants. The crane fly is occasionally considered a mild turf pest in some areas. In 1935, Lord's Cricket Ground in London was among the venues affected by leatherjackets: several thousand were collected by ground staff and burned, because they caused bald patches on the wicket and the pitch took unaccustomed spin for much of the season. Little is known of the juvenile biology of many crane fly species. The larvae of less than 2% of the species have been described. Of those that have been described, many prefer moist environments, and some leatherjackets are aquatic. (taken from wikipedia)