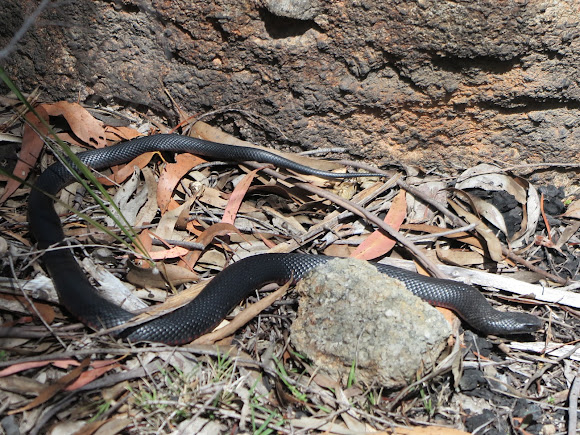 The "red-bellied black snake" can be found along the east coast of Australia. This snake has a very distinctive appearance, with its upper surface being a glossy purplish black and its underside a dull pink or cream on the belly turning to a pale pink or a brilliant red towards the sides. Like all elapid snakes, it is front fanged - which means it has a pair of hollow, fixed fangs at the top front of the mouth. It injects venom through these fangs from pair of glands at the back of the top jaw. It is considered dangerously venomous, but it is not aggressive and will usually try to escape. If provoked, it will recoil into its striking stance and hiss loudly as a threat. It may even make a feinting strike, while keeping its mouth closed. It can grow to a length of 2.5 metres, but this spotting was nowhere near that. I estimate its length to be approximately 1 metre, which leads me to think this specimen is a juvenile.

Common in woodlands, forests and swamplands of eastern Australia. This specimen was spotted in native bushland in Girraween National Park, along the Pyramid Track. Remote, lots are granite boulders, substantial undergrowth and leaf litter. Here's some park info - http://en.wikipedia.org/wiki/Girraween_N...

Due to the small size of this specimen, another species considered was the "eastern small-eyed snake" (Cryptophis nigrescens). They are also found in this area. However, upon closer inspection of these photos, the red underbelly scales and distinct facial features of the red-bellied black snake are visible, hence Pseudechis porphyriacus is the correct ID.

I looked very healthy. Only the second one I've ever seen in the wild, although I was raised in the city and probably just not aware of their presence.

Nice healthy looking specimen ...used to these as a kid on my grandparents property out of Harrington , but not far from the coast