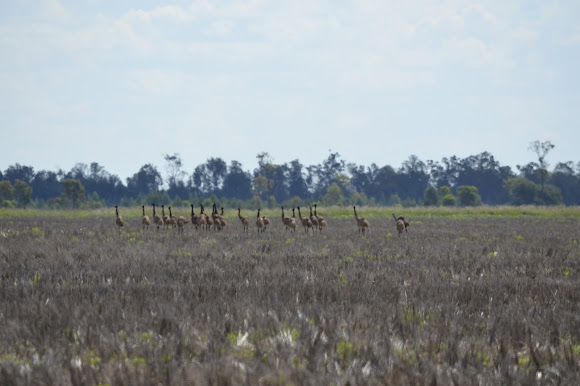 The word emu comes from the Portuguese word 'ema', which means 'large bird'. The Emu is a large flightless bird. They stand to be 1.5 to 2 metres tall, and on average weight 36 kilograms. They have 3 toes, and long legs which allows them to run extremely fast. In this species, the female is larger than the male. The female lays up to 20 eggs, which are large and are soft dark green in colour. These eggs are often prized not only by humans for decoration pieces, but by animals as a food source. The male incubates the eggs for a period of 7-8 weeks, and does not leave the nest for this period. When the eggs hatch, the male emu looks after the hatchlings for another six months.

Emu's feed on grass, leaves and small insects. They live all over Australia in grasslands. The emu is a hardy bird and will survive in most parts of Australia's rugged environment, but it avoids thickly forested regions. It thrives in remote places like the dry plains at Australia's centre, the tropical woodlands to the north, and the cold snowfields of the high country. Emus eat a wide variety of leaves, grasses, fruits, native plants, and insects. In spring and summer, their diet consists mainly of flowers and seeds. In autumn, as those foods become scarce, they graze on young grass which sprouts after summer rains. In winter, herbs form the emu's main food. They eat insects when these are available - such as during grasshopper plagues.

I spotted this mob of emu's (in the wild) travelling between Roma and Surat. Had to pull up for a photo....there were quite some distance away, hence no close up shots sorry.