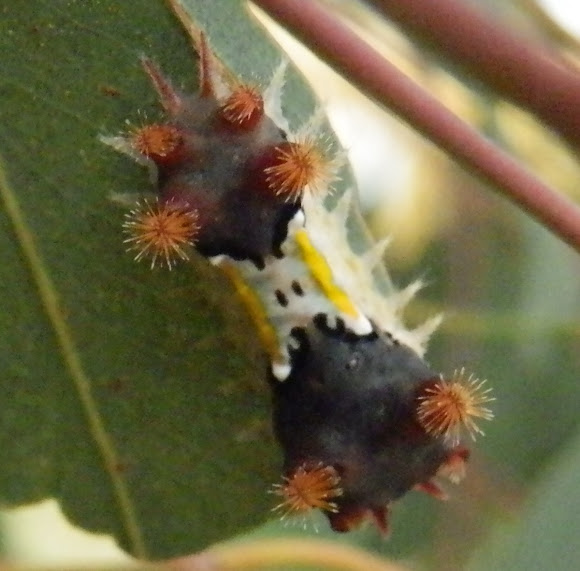 A 2cm long caterpillar which looked like a rectangular sponge finger with dark chocolate, white and yellow sugar icing !!. The caterpillar had raised knobs on its thorax and last two abdominal segments - four each. Each of these knobs had retractable orange bristles. Pic #2 shows head end, Pic #3 the rear end and pic #4 shows retracted bristles. The pro legs were translucent and appeared to do little to facilitate locomotion - they protruded horizontally along the sides of the caterpillar.

Inspired by martinl, I trotted down the road to check the tree where I had spotted the cup moth cocoon a few days ago and sure enough there were two caterpillars on the tree - probably later instars. contact with the bristles is supposed to have nasty side effects !

Martin, I was so pleased to see this one. Thanks to you of course, I've learnt so much and didn't even need to get stung !

That's a nice spotting Leuba. I'm glad you saw some because I think they're mostly grown and pupated now. My moth emerged on Dec 7th and early instars were Jan 29 http://www.projectnoah.org/spottings/866.... It looks like only one annual generation at this latitude, but they were more common this year than I remember. The bristles sting mildly for 15 minutes with no rash. Its a sacrifice I made for science.

Thank you Bernadette and Francis - they are cute little cattys despite their bristles. I was so lucky to find them -it's the season for these I think. There were two more cocoons on this tree as well.

Cool spotting - nice to be inspired by other spottings - and I love your description of this critter looking like chocolate and icing!

sorry photos are not as clear as I would have liked !