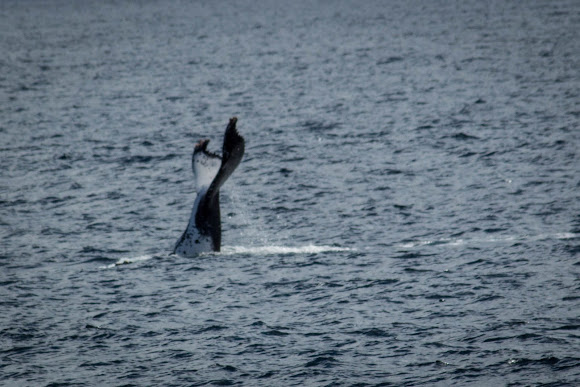 Humpback whales have a small dorsal fin located nearly two-thirds of the way down their back, and their backs steeply arch as they dive – this is how the humpback got its name and it helps whale watchers distinguish them from other speciesOther distinguishing features include large pectoral fins (which may be up to a third of the body length), and unique markings of black and white on the underside of the tail flukes. These markings are like fingerprints, no two are the same. This fingerprint, or fluke identification, helps researchers identify individuals as they migrate along the coast.

Migrations Most humpback whales make exceptionally long journeys every year between their feeding and breeding sites. Humpbacks can travel up to 8 km/h but during their long migration journey they average only 1.6 km/h, resting and socialising along the way. Because seasons are reversed on either side of the equator, northern and southern hemisphere populations of humpbacks probably never meet. Those in the north travel towards their breeding grounds in tropical waters as those in the south are travelling towards the pole to feed, and vice versa

Just corrected myself !....was really not thinking