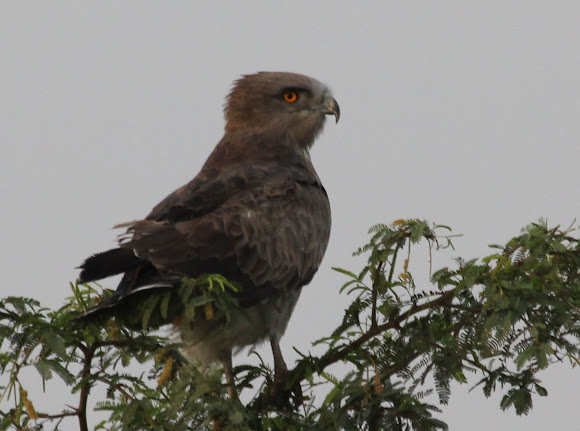 Can be recognised in the field by their predominantly white underside, the upper parts being greyish brown. The chin, throat and upper breast are a pale, earthy brown. The tail has 3 or 4 bars. Additional indications are an owl-like rounded head, brightly yellow eyes and lightly barred under wing. The Short-toed Snake Eagle is an accomplished flyer and spends more time on the wing than do most members of its genus. It favours soaring over hill slopes and hilltops on updraughts, and it does much of its hunting from this position at heights of up to 500 meters (550 yards). When quartering open country it frequently hovers like a Kestrel. When it soars it does so on flattish wings. The prey consists mostly reptiles, mainly snakes, but also some lizards. Sometimes they become entangled with larger snakes and battle on the ground. Occasionally, they prey on small mammals up to the size of a rabbit, and rarely birds and large insects. This eagle is generally very silent. On occasions, it emits a variety of musical whistling notes. This bird has suffered a steep decline in numbers and range in Europe and is now rare and still decreasing in several countries due to changes in agriculture and land use. It needs protection. In the middle and far eastern part of its range, this species is not yet threatened.

Seen near a marshy wetland.

Description from wiki. Seen on a birding trip with Atul and Yogesh Save. Clicked by Atul and I have his permission to load this pic.

Thank you Karen. Thank you Yogesh, it was a memorable trip.