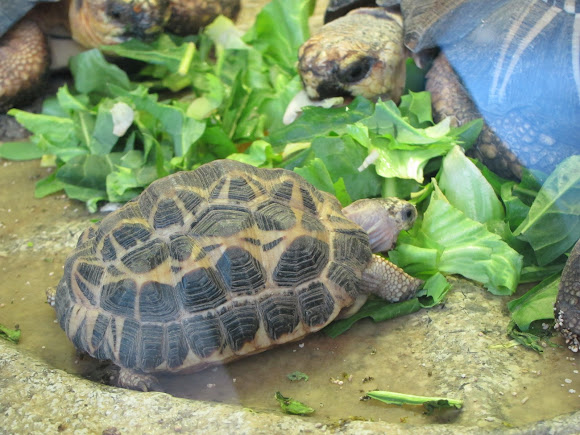 The radiated tortoise (Astrochelys radiata) is a species in the family Testudinidae. Although this species is native to and most abundant in southern Madagascar, it can be also be found in the rest of this island, and has been introduced to the islands of Réunion and Mauritius. As the Radiated Tortoises are herbivores, grazing constitutes 80-90% of their diet, while they also eat fruits and succulent plants. A favorite food in the wild is the Opuntia cactus. They are known to graze regularly in the same area, thus keeping the vegetation in that area closely trimmed. They seem to prefer new growth rather than mature growth because of the high-protein, low-fiber content. These tortoises are, however, endangered, mainly because of the destruction of their habitat by humans and because of poaching. Wikipedia