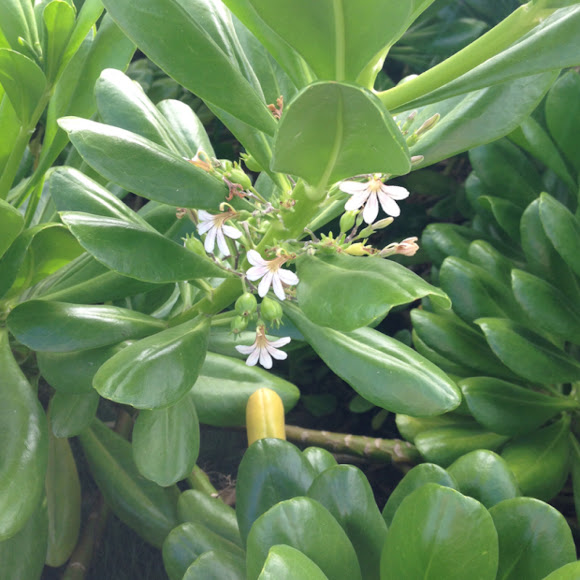 Scaevola is a genus of flowering plants in the Goodenia family, Goodeniaceae. It consists of more than 130 tropical species, with the center of diversity being Australia and Polynesia. It is said that two lovers, greatly devoted to each other, came to the attention of the Goddess Pele. Pele found the young man desirable and appeared before him as a beautiful stranger. But no matter what Pele did the lovers remained devoted to each other. Angered, Pele chased the young man into the mountains, throwing molten lava at him. Pele's sisters witnessed this and to save the young man from a certain death they changed him into the mountain Naupaka. Pele immediately went after the young woman and chased her towards the sea - but again Pele's sisters stepped in and changed the young lover into beach Naupaka. It is said that if the mountain Naupaka and beach Naupaka flowers are reunited, the two young lovers will be together again.

Scaevola is the only Goodeniaceae genus that is widespread outside of Australia. In at least six separate dispersals, about 40 species have spread throughout the Pacific Basin, with a few reaching the tropical coasts of the Atlantic and Indian Oceans. The Hawaiian Islands are home to ten Scaevola species, nine of which are endemic. Eight of the indigenous species are the result of a single colonization event. Scaevola glabra and Scaevola taccada arrived separately to produce a total of three colonizations of Hawaii by Scaevola. Some of the endemic species are of hybrid origin. Beach Naupaka (Scaevola taccada synonym S. sericea) occurs throughout the Pacific and Indian Oceans and is considered an invasive species in Florida, USA, and in some islands of the Caribbean including the Cayman Islands and the Bahamas. Beachberry or Inkberry (Scaevola plumieri) is widespread along the Atlantic coast of the tropical Americas and Africa; however, it is becoming rarer in areas where S. taccada is displacing native coastal plants.