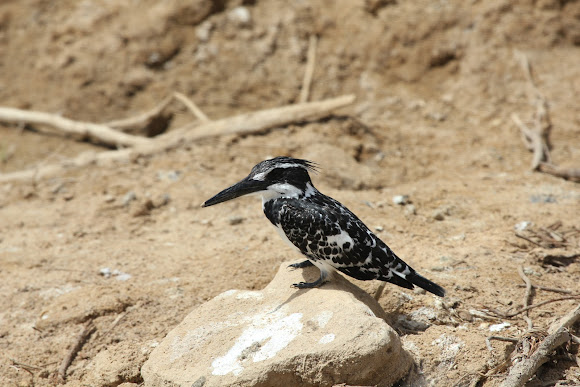 This kingfisher has a black mask, a white supercilium and black breast bands. The crest is neat and the upperparts are barred in black. Males have a narrow second breast-band while females have a single broken breast band. This kingfisher feeds mainly on fish, although it will take crustaceans and large aquatic insects such as dragonfly larvae. It usually hunts by hovering over the water to detect prey and diving vertically down bill-first to capture fish. When not foraging, they have a straight rapid flight and have been observed flying at nearly 32 mph. They can deal with prey without returning to a perch, often swallowing small prey in flight, and so can hunt over large water bodies or in estuaries that lack perches that are required by other kingfishers. Unlike some kingfishers, it is quite gregarious, and forms large roosts at night. When perched, the often bob their heads up and down and will sometimes raise their tail and flick it downwards. They call often with sharp chirruk chirruk notes. This species was initially believed to be descended from an ancestral American green kingfisher which crossed the Atlantic Ocean about 1 million years ago. A more recent suggestion is that the Pied Kingfisher and the American green kingfishers are derived from an Old World species, with the Pied Kingfisher or its ancestor losing the metallic colouration afterwards.

Seen near a marshy wetland.

Clicked by Atul and I have his permission to load this pic. All details from wikipedia.

Nice to see on ground,