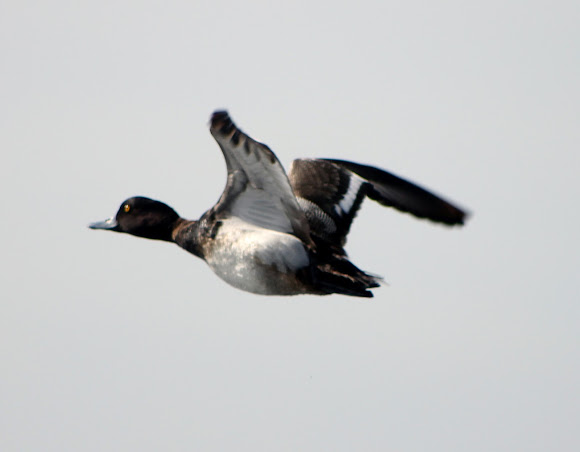 The (Aythya affinis) is a small North American diving duck that migrates south as far as Central America in winter. It is colloquially known as the Little Bluebill or Broadbill because of its distinctive blue bill. The origin of the name scaup may stem from the bird's preference for feeding on scalp - the Scottish word for clams, oysters, and mussels, however, some give it credit to the female's discordant scaup call as the name's source.[1] It is apparently a very close relative of the Holarctic Greater Scaup or "bluebill" (A. marila), with which it forms a superspeciesAdults are 38–48 cm (15–19 in) long, 41.7–43 cm (16.4–17 in) on average. The species can weigh 454–1,089 g (1.00–2.40 lb); males weigh 820 g (1.8 lb) on average and weigh noticeably less, at 730 g (1.6 lb) on average.[3] Wing lengths (not wingspans) are about 7.5–7.9 in (19–20 cm) in males and 7.3–7.8 in (19–20 cm) in females; the tarsus is about 1.4–1.5 in (3.6–3.8 cm) long, and the bill 1.4–1.7 in (3.6–4.3 cm).[4] The wingspan is 68–78 cm (27–31 in).[3] The adult males (drakes) in alternate plumage have a black, effervescent head and a small tuft at the hindcrown, a black breast, a whitish-grey back and wings with darker vermiculations and black outer and geyish-brown inner primary remiges. The underparts are white with some olive vermiculations on the flanks, and the rectrices and tail coverts are black. Adult females (hens) have a white band at the base of the bill, often a lighter ear region, and are otherwise dark brown all over, shading to white on the mid-belly. Drakes in eclipse plumage look similar, but with a very dark head and breast, little or no white on the head and usually some greyish vermiculations on the wings. Immature birds resemble the adult females, but are duller and have hardly any white at the bill base. Both sexes have white secondary remiges, a blue-grey bill with a black "nail" at the tip and grey feet; the drakes have a bright yellow iris, while that of females is orange or amber and that of immatures is brown. Downy hatchlings look much like those of related species, with dark brown upperparts and pale buff underparts, chin, supercilium and back spots.[4] These birds are not very vocal, at least compared to dabbling ducks. Hens give the namesake discordant scaup, scaup call; in courtship drakes produce weak whistles. Hens vocalize more often than those of the Greater Scaup – particularly during flight –, but their call is weaker, a guttural brrtt, brrtt

Their breeding habitat is inland lakes and marsh ponds in tundra from Alaska through western Canada to western Montana; few breed east of James Bay and the Great Lakes. Notable breeding concentrations, with more than half a million birds at the height of the season, can be found in Alaska, in the woodlands of the McKenzie River valley and on the Old Crow Flats. These birds migrate south (mostly via the Central and Mississippi Flyways) when the young are fledged and return in early spring, usually arriving on the breeding ground in May. Lesser Scaup typically travel in flocks of 25-50 birds and winter mainly on lakes, rivers and sheltered coastal lagoons and bays between the US-Canadian border and northern Colombia, including Central America, the West Indies and Bermuda. Wintering Lesser Scaup are typically found in freshwater or slightly brackish habitat and unlike Greater Scaup rarely are seen offshore when unfrozen freshwater habitat is available. They may even spend the winter on lakes in parks, as long as they are not harassed, and will occur even on smallish Caribbean islands such as Grand Cayman. Thousands winter each year on the Topolobampo lagoons in Mexico, and even in the southernmost major wintering location – Ciénaga Grande de Santa Marta in Colombia – hundreds of birds can be seen. In Central America, flocks are present from July on, but only really numerous after September. They move north again in April and May. In the extreme southeast and southwest of the breeding range – the Rocky Mountains region of the northwestern USA and the southern Great Lakes – Lesser Scaup are present all-year; it is not clear whether the breeding birds are replaced by migrants from the far north in winter, or whether the local populations do not migrate, or whether both local and migrant birds are found there in winter.[7] They are rarely – but apparently increasingly often – seen as vagrants in western Europe. The first documented British record was a first-winter male at Chasewater, Staffordshire in 1987[8] but by 2006, over 60 had been recorded, with an average of 2 per year. UK records are typically in the northern parts of the country. Vagrant Lesser Scaup have also been recorded on the Hawaiian Islands Japan, possibly China, and – for the first time on 18 January 2000 – in the Marianas, as well as in Ecuador, Surinam, Trinidad and Venezuela (in winter), and Greenland (in summer

Although the Lesser Scaup has the largest population of any species of diving duck in North America, their population has been steadily declining since the mid-1980s, and reached an all-time low in the early 20th century. During breeding bird surveys, Lesser and Greater Scaup are counted together due to the impossibility of identifying the species unequivocally when large numbers of birds are involved. Lesser Scaup are thought to comprise slightly less than nine-tenths of the scaup population of North America. In the 1970s, the Lesser Scaup population was estimated at 6.9 million birds on average; in the 1990s it had declined to about half that number, and by the late 2000s it is estimated at 3 million individuals or less. Due to the wide breeding range and the fact that the rate of decline, though remarkable, is still not threatening in respect to the enormous overall numbers, the Lesser Scaup is classified as a Species of Least Concern by the IUCN. An increase of the decline is liable to result in an uplisting to Near Threatened or even Vulnerable status.[13] The causes for this stark – though not threatening, as of yet – decline remain unknown. There are indications that the breeding success is decreasing, but why this is so remains puzzling. On one hand, pollution and habitat destruction, especially in the wintering regions, has certainly increased since the early-mid 20th century. On the other hand, the narrow time frame in which Lesser Scaup breed and raise their young may be tied to some specific ecological conditions – such as abundance of key food items – which shifted winterwards due to global warming, without the ducks being able to adapt. In this regard, it is alternatively or additionally possible that Great Scaup, which may be increasing in numbers, is putting the Lesser Scaup under increasingly severe competition.[14] However, it seems that Greater Scaup eats larger food items on average,[15] and the species are sympatric in part of their range and presumably have been for millennium without any problems due to competition. The experience of the past as well as the reproduction rate – even if this is declining – suggests that hunting has no major impact on Lesser Scaup populations at present either. Also, the breeding habitat is mainly in regions little-used by humans; habitat destruction on the