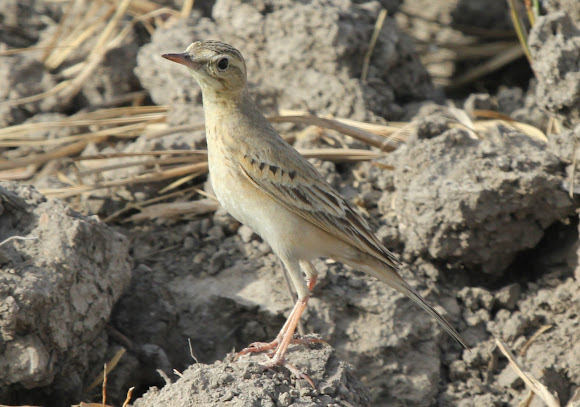 This is a large pipit, mainly sandy brown above and pale below. It is very similar to Richard's Pipit, but is slightly smaller, has shorter wings, tail and legs and a narrower dark bill. It is also less streaked. Its flight is strong and direct, and it gives a characteristic "schip" call, higher pitched than Richard's. Its song is a short repetition of a loud disyllabic chir-ree chir-ree. Tawny Pipit is insectivorous, like its relatives.

The Tawny Pipit, is a medium-large passerine bird which breeds in much of temperate Europe and Asia, and northwest Africa. It is a migrant moving in winter to tropical Africa and the Indian subcontinent. Seen at an open grassland at Blackbuck Sanctuary.

Details from wiki, shot by Atul and I have his permission to upload this bird pic.

Cute little guy. You say he's a large pipit- could you give am approximate height measurement?

This tawny pipit is very pretty! I will keep "Nalsarovar" in mind.Thnx for the info.

Emma, we usually go to our local pond. I keep visiting Nalsarovar, which is a bird sanctuary, when I visit my factory in Gujarat. This time Atul and Yogesh had joined me for Nalsarovar and then we went to Blackbuck Sanctuary.

Satyen ,where did you go to see these ?

Thanks Karen. The recent collection is from the unforgettable birding trip with Atul and Yogesh Save.

Lovely photo! Is this from your birding trip Satyen?

Thank you very much. The credit again goes to Atul.