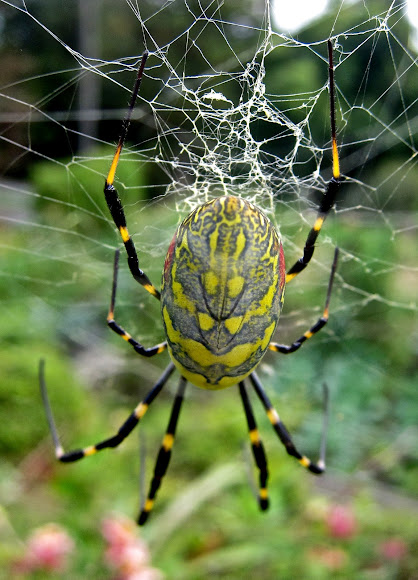 Nephila clavata, also known as the Jorō Spider (ジョロウグモ（女郎蜘蛛、上臈蜘蛛） Jorō-gumo?), is a member of the golden orb-web spider group. The spider can be found throughout Japan except Hokkaidō, in Korea, Taiwan and China. Due to the large size as well as the bright, unique colors of the species of the female Nephila, the spider is well-favored in Japan. The female's body size is 17–25 mm, while the male's is 7–10 mm. After mating the female spins an egg sack on a tree, laying 400 - 1500 eggs in one sack. Nephila clavata pass winter as eggs and scatter as tiny juveniles in the spring. The life cycle ends by late autumn or early winter. Jorōgumo is a legendary creature in Japanese folklore. A Jorōgumo is a spider which can change its appearance into that of a beautiful woman. She attracts men, and once a man has been trapped as a result of her seduction, he will be tied up and eaten by her. Source: Wikipedia

Right bayucca, I see you answered that before. Thanks again. I thought they were the males.

In Nephila the males are really much smaller than the females, so, the smaller one in #2 is definitely the male.
http://www.flickr.com/photos/dominikhofe...

still trying to solve the problem of whether the small spiders are males or an exuvia (discarded skin)?

Any further ideas as to whether the small spiders in photos 2 & 3 are males, or an exuvia (discarded skin)?

well the blue bee will have to wait to have it's photo taken as I am in Japan at the moment...!

thanks... Spiders are easy to capture, they stay still! Not like a certain bee we've been talking about. Still don't know how you managed that shot.

hehehe, looked this morning, but no activity around the purple flowered bush! A bit busy for a couple of days building a new chicken wire green house to keep the peacocks, squirrels & monkeys out of my salad!

thanks Ignacio, and Argybee. Seems like there is a deadlock as to whether the small spider in photos 2 & 3 is indeed a male, or an exuvia (discarded skin). In photo 3 there definitely seems to be 4 legs missing on the small spider. Any other ideas?

Exactly, she came out of that. Probably her last one before being able to mate

Hey pamsai that's a ripper! And you got the male. Well done.

Right! Amazing! So that means at some time she would have come out of this? Or is it from another species?

Well, in Nephila genus eating the male after mating is not very common, and thinking about sizes, males are about 1/5 of the female's size, so if it were a male's Exuvia even being the last one it would be smaller.

@ Ignacio, yes, I noticed the missing legs. Wondered about that. And the one in # 2 seems to only have 2 legs! Thought maybe they had mated and the female had started her meal!! I enlarged it and took a look. If it is alive, it is in a very bad way... Bits missing all over!
So would that be exuvia of the male, then? That seems to be about the size the males are.

Exuvia!!!! That's the word (actually is used in spanish too, i don't know how forgot it)... Anyways i still thinking the little spider is the exuvia, if you look carefully you'll see it has 4 legs missing and to me it looks empty.
Here's a photo of a Nephila exuvia, is not N. clavata but pilipes, it is just for you to can realize how they look like: http://it.wikipedia.org/wiki/File:Nephil...
And here is a photo of a male: http://commons.wikimedia.org/wiki/File:N...
Hope we have helped you...

What a great color!

thanks Bayucca. Thought that might be the males. Though how mating takes place is a puzzle!

I think the small spider in #2 and #3 is actually the much smaller male. The english name of the "old skin" is Exuvia. Exoskeleton means the outer skeleton of usually a living animal which gives stability. Humans like Ignacio have an endoskeleton.