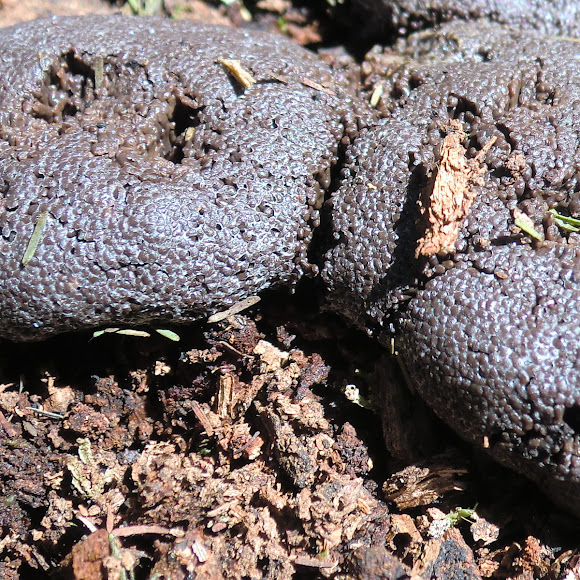 Three rounded lumps of brown-purple-grey rubbery with some breaks in the 'skin'; The skin seems made of compressed nodules but at the breaks I could clearly see the nodules were only the ends of columns. These lumps were approx. 80mm long.

This was in the top of a very old eucalyptus stump that had well filled over years with moist forest dross. All in tall, dense eucalyptus forest.

from messiah.edu... http://www.messiah.edu/Oakes/fungi_on_wo... "Slime molds form structures called plasmodia which are naked (i.e., without cell walls) masses of protoplasm which can move and engulf particles of food in an amoeboid manner." ...so here come another big learning curve for a non-biologist! (I couldn't find the ladder it used to get up there.:) Thanks to AlexKonig for the identity.

done with pleasure ! it could also have been red! Colors are undependable because very variable. this one should have colors from light-pink to dark-red,--> when maturing it turns into that dark color, we have here!

That looks like the right thing Alex. It's amazing to think that it was probably bright pink at some point because we just don't get colours like that in the Aus bush. Thanks for the help.