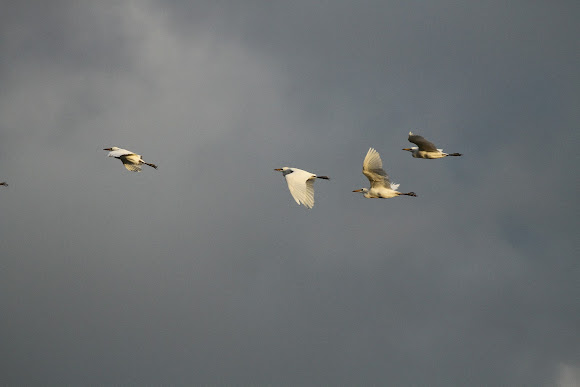 The cattle egret (Bubulcus ibis) is a cosmopolitan species of heron (family Ardeidae) found in the tropics, subtropics and warm temperate zones. It is the only member of the monotypic genus Bubulcus, although some authorities regard its two subspecies as full species, the western cattle egret and the eastern cattle egret. Despite the similarities in plumage to the egrets of the genus Egretta, it is more closely related to the herons of Ardea. Originally native to parts of Asia, Africa and Europe, it has undergone a rapid expansion in its distribution and successfully colonised much of the rest of the world in the last century.

The egret's habitat has expanded rapidly but it as purposely introduced in Hawaii in 1959.

Thanks AshleyT for the correction!

Harrison the Noble Swordsman 5 years ago

From a distance they actually do look like terns but they are indeed egrets. :D

Absolutely. Thanks for the help and I'll make the correction later on after school. 8-)

That's what we're here for! Always have to take everything with a grain of salt and look into it and see if you agree. Good and bad things about citizen science sites :)

Thanks Ashley. I was showing this site to my students and you demonstrated perfectly how powerful the community of citizen scientists can be. :-)

If you compare the shape of a tern to the shape of your bird, you will see they are completely different. These are egrets :)

Welcome to Project Noah, misterallaire,
I hope you like the site as much we do; there are many features you can explore:
I invite you to go to http://www.projectnoah.org/faq where you will find the purpose and “rules” of Project Noah.
There is a blog http://blog.projectnoah.org/ where we post articles from spotters with special insight into different organisms.
There are also the chats for help with identification, and to comment on your own and others’ spottings.
Look at the global and local missions to put your spottings into:http://www.projectnoah.org/missions
Enjoy yourself here, see you around!