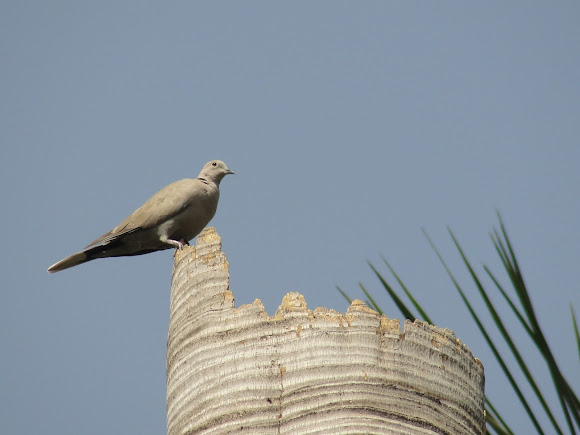 It is a medium sized dove, distinctly smaller than the Wood Pigeon, similar in length to a Rock Pigeon but slimmer and longer-tailed, and slightly larger than the related Turtle Dove, 30–33 cm long from tip of beak to tip of tail, with a wingspan of 47–55 cm, and a weight of 125–240 g. It is grey-buff to pinkish-grey overall, a little darker above than below, with a blue-grey underwing patch. The tail feathers are grey-buff above, and dark grey tipped white below; the outer tail feathers also tipped whitish above. It has a black half-collar edged with white on its nape from which it gets its name. The short legs are red and the bill is black. The iris is red, but from a distance the eyes appear to be black, as the pupil is relatively large and only a narrow rim of reddish-brown iris can be seen around the black pupil. The eye is surrounded by a small area of bare skin, which is either white or yellow. The two sexes are virtually indistinguishable; juveniles differ in having a poorly developed collar, and a brown iris.

Collared Doves typically breed close to human habitation wherever food resources are abundant and there are trees for nesting; almost all nests are within a kilometre of inhabited buildings. The female lays two white eggs in a stick nest, which she incubates during the night and which the male incubates during the day. Incubation lasts between fourteen and eighteen days, with the young fledging after fifteen to nineteen days. Breeding occurs throughout the year when abundant food is available, though only rarely in winter in areas with cold winters such as northeastern Europe. Three to four broods per year is common, although up to six broods in a year has been recorded.