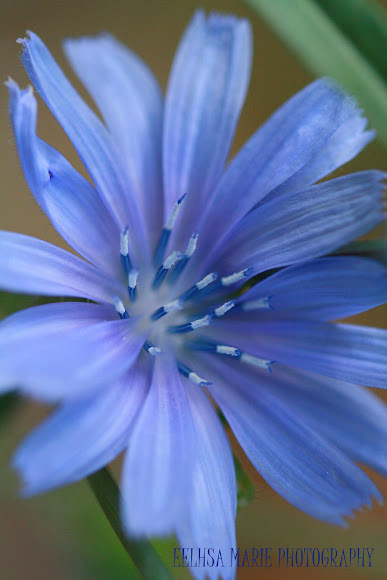 The Common Chicory is a perennial plant that is native to Europe but has become widely naturalized in North America and Australia. It is known by many other names, such as: blue dandelion, blue daisy, blue weed, coffeeweed, hendibeh, horseweed, succory, wild bachelor's buttons, and wild endive. The flowers are typically a bright blue although they can occur in less common pink or white varieties. The leaves of this plant have been used in salads and the roots can be baked, ground and used as a coffee substitute. It is also grown as food for livestock and has been shown to reduce internal parasites in farm animals. The plant has various other medicinal properties, some of which are still unconfirmed or debated, such as a belief that it aids in the prevention and/or treatment of cancer. Chicory can grow anywhere from 30-100 centimeters (10-40 inches) tall and the flowers are approximately 2-4 centimeters (0.79-1.6 inches wide). It flowers from July through October.

Common Chicory can be found growing alongside roads, in fields and waste areas and areas of high traffic. It likes open, sunny areas.

I haven't really observed this flower in Northwestern Ontario, and it was nice to be able to see some here in Ohio. I love the beautiful blue colour. I found this particular plant alongside a dirt road and I have since seen many others as I've traveled around this area.