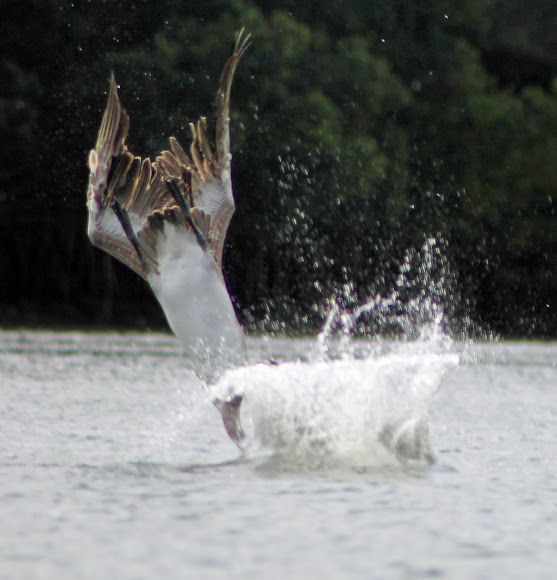 The Brown Pelican occurs on both coasts in the Americas. On the Atlantic Coast and Gulf Coast they distribute from Nova Scotia to Venezuela, and to the mouth of the Amazon River. On the Pacific Ocean they are found from British Columbia to south central Chile, and including the Galapagos Islands.[2] Some immature birds may stray to inland freshwater lakes. After nesting, North American birds move in flocks further north along the coasts, returning to warmer waters for winter. Their young are hatched in broods of about 3, and eat around 150 lbs. of fish in the 8–10 month period they are cared for. This bird is distinguished from the American White Pelican by its brown body and its habit of diving for fish from the air, as opposed to co-operative fishing from the surface. It eats mainly fish and amphibians as well as crustaceans. Groups of Brown Pelicans often travel in single file, flying low over the water's surface. The nest location varies from a simple scrape on the ground on an island to a bulky stick nest in a low tree. These birds nest in colonies, usually on islands

Pesticides like DDT and dieldrin threatened the Brown Pelican's future in the southeast United States and California in the early 1970s. Pesticides also threatened the pelican population in Florida in this period. A research group from the University of Tampa headed by Dr. Ralph Schreiber conducted research in the Tampa Bay/St Petersburg area and found that DDT caused the pelican eggshells to be too thin and incapable of supporting the embryo to maturity. As a result of this research, DDT usage was eliminated in Florida, followed by the rest of the US. Along with the American White Pelican, the Brown Pelican is protected by the Migratory Bird Treaty Act of 1918. The International Union for Conservation of Nature's Red List has listed the Brown Pelican as Least Concern since 1988.[1] The US government imposed a ban on the use of DDT in 1972. Since then, the population of Brown Pelican has increased. Current estimates place the population at 650,000 individuals

Thanks for the comments everyone

yes he was. Lots of them out that day

That's a wonderful shot of the bird diving ! - the brown colouring makes it a lot more interesting than the white pelican - thanks for the pics.

Thanks, I was kayaking and there were several all around,it was a bit of a challenge , lol