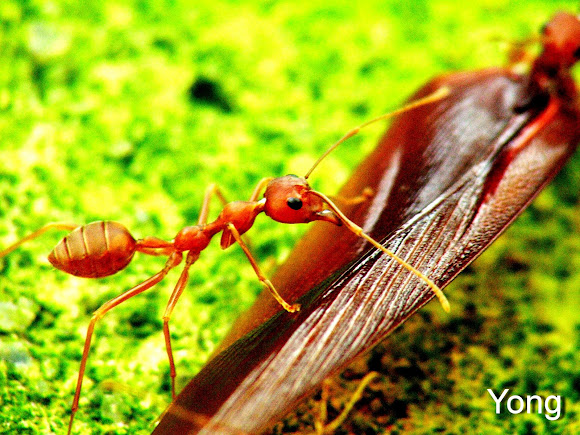 (From Wikipedia), Oecophylla smaragdinais known in common names as red ant, yellow ant, green ant or weaver ant. They vary in color from reddish to yellowish brown dependent on the species. These are scientific classification of Oecophylla smaragdina Fabricius, Kingdom: Animalia Phylum: Arthropoda Class: Insecta Order: Hymenoptera Family: Formicidae Species: O.smaragdina Taxonomy: General, they make nests in trees made of leaves stitched together using the silk produced by their larvae. A queen lays her first clutch of eggs on a leaf and protects and feeds the larvae until they develop into mature workers. The workers then construct leaf nests and help rear new brood laid by the queen. The major workers of ant are approximately eight to ten millimeters in length and the minors approximately half the length of the majors.

They are several found in Asia and Australia. The nests are on the fruit trees.

I found it at near my house, Ladkrabang, Bangkok, Thailand