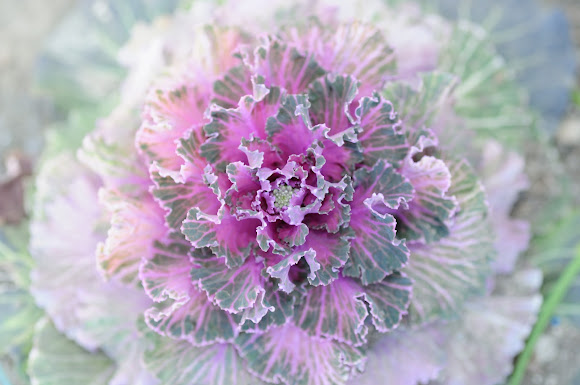 Life and mathematics. Not far from a fractal. It is a close relative to romanescu. This species of Brassica are open plants, not heading like the cabbages, nor producing eatable flowers like the cauliflowers and broccoli. The species has every appearance of being one of the early removes from the original species and is cultivated in many varieties known as kale, greens, sprouts, curlico, with also some distinguishing prefixes as Buda kale, German greens. Some are grown as ornamental plants, being variously curled, laciniated and of beautiful colors. In 1661, Ray journeyed into Scotland and says of the people that "they use much pottage made of coal-wort which they call keal." It is probable that this was the form of cabbage known to the ancients. Many varieties of kale are referred to as "flowering kales" and are grown mainly for their ornamental leaves, which are brilliant white, red, pink, lavender, blue or violet in the interior or the rosette. Most plants sold as "ornamental cabbage" are in fact kales. Ornamental kale is as edible as any other variety. When uncooked, standard kale is a popular garnish.