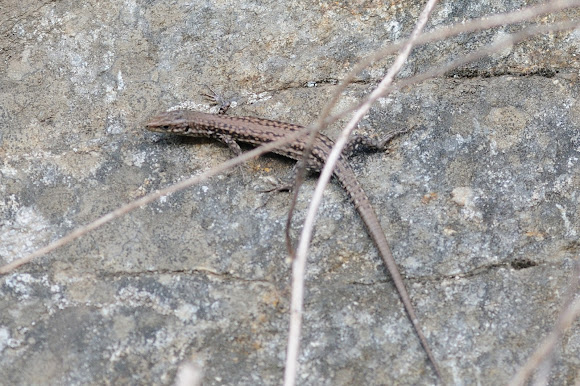 The Spanish Psammodromus (Psammodromus hispanicus) is a species of lizard in the Lacertidae family. They are slender and long-bodied. They have a small pointed head, normal to large sized hind limbs and a very long, slender tail, they have keeled, overlapping scales and like its cousin the Large Psammodromus, they have a rough appearance. They are often dark brown, olive-brown or dark red, rusty colour with many lighter irregular blotches, streaks and small lines especially in the middle of the sides and on the top of flanks. But also along the top of the back where they usually have lots of small streaks of white bordered by a darker colour. Their belly is yellowish. They feed mainly on small insects & spiders. When disturbed they will flee into close by vegetation. If they are caught however, they may squeak, but never bite.

They are found over most of the Iberian peninsula excluding the north coast and the Pyrenees. In France they can only be found along the Mediterranean coast. Its natural habitats are Mediterranean-type shrubby vegetation, temperate grassland, sandy shores, arable land, pasture land, and rural gardens. It is threatened by habitat loss.They are found at up to 1500 meters in altitude. They inhabit dry open Mediterranean areas. Theses habitats are characterised by a stone cover and in most cases, a loose soiled area not too far away (sand...). This one was found on the banks of Miño river, at Ribeira Sacra region, close to Escairón.