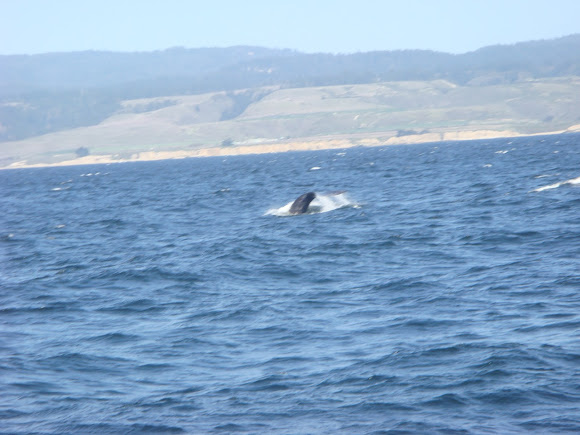 Santa Cruz Whale Watching is incredible! Followed five gray whales on their northern migration for two hours- and yes, it did happen to be the best two hours of my life. The whale’s spouts looked like a verticle column of mist at first, but as we advanced (and stayed our respectful 100 yds away, ordered by the MMPA) you could see the distinct V-shaped blow. It kind of looked like a giant heart as it scattered the Pacific. We lucked out with five individuals exhibiting beautiful behaviors, one such being fluking. Their flukes are so beautiful! In the beginning, the whales stayed under about 8 minutes each. As the time passed, they surfaced more frequently.There was one pod of four (comprised of two adults and two calves) and one loner. All five whales were migrating to their summer feeding grounds in the North Pacific and Bering Sea from Baja, California. I can imagine they must be starving! They stayed quite close to shore in order to protect the calves from transient orcas, who prey on the mysticetes from the great canyons below. We mostly saw the whale's peduncle and cuadal areas, but occasionally we saw their rostrums.