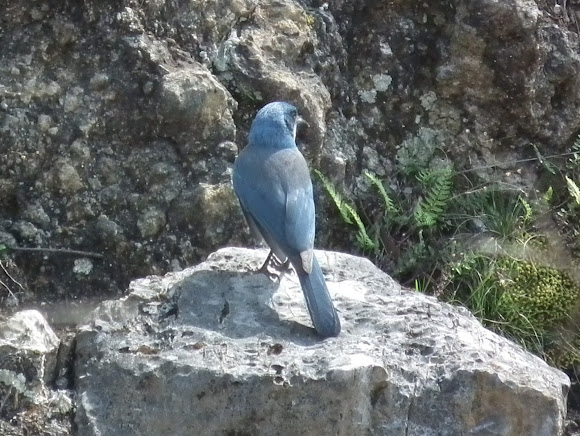 The Mexican Jay is a medium-large (~120 g) passerine similar in size to most other jays, with a blue head, blue-gray mantle, blue wings and tail, and pale gray breast and underparts. The sexes are morphologically similar, and juveniles differ only in having less blue coloration and, in some populations, a pink/pale (instead of black) bill that progressively becomes more black with age

The Mexican Jay, Aphelocoma wollweberi,[1] formerly known as the Gray-breasted Jay, is a New World jay native to the Sierra Madre Oriental, Sierra Madre Occidental, and Central Plateau of Mexico. It reaches north to eastern Arizona, western New Mexico and western Texas in the United States. Its preferred habitat is montane pine-oak forest.

Definitely one of the jays

Wow I like its colors. Is a beautiful bird

Thnk you Goody for the ID. It was a really fast ID. And yes, you are raight again it is Jay. Mexican Jay (Aphelocoma ultramarina)