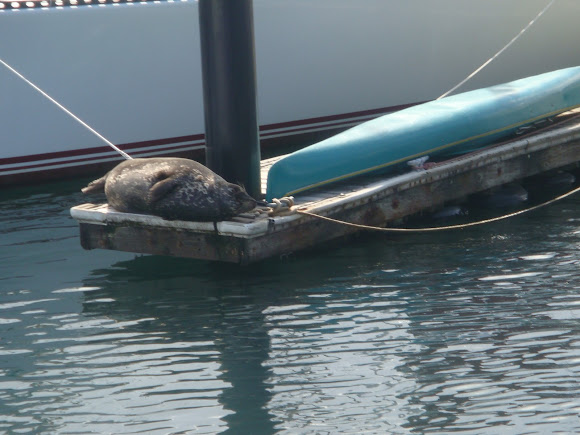 The harbor (or harbour) seal (Phoca vitulina), also known as the common seal, is a true seal found along temperate and Arctic marine coastlines of the Northern Hemisphere. They are found in coastal waters of the northern Atlantic and Pacific Oceans, as well as those of the Baltic and North Seas, making them the most widely distributed of the pinnipeds (walruses, eared seals, and true seals). Common seals are brown, tan, or gray, with distinctive V-shaped nostrils. An adult can attain a length of 1.85 meters (6.1 ft) and a mass of 132 kilograms (290 lb). Females outlive males (30–35 years versus 20–25 years). Common seals stick to familiar resting spots or haulout sites, generally rocky areas (although ice, sand and mud may also be used) where they are protected from adverse weather conditions and predation, near a foraging area. Males may fight over mates underwater and on land. Females are believed[according to whom?] to mate with the strongest males and generally bear a single pup, which they care for alone. Pups are able to swim and dive within hours of birth, and they develop quickly on their mothers' fat-rich milk. A fatty tissue layer called blubber is present under their skins and helps to maintain body temperature. Their global population is 5-6 million, but subspecies in certain habitats are threatened. Seal hunting or sealing, once a common practice, is now illegal in many nations within the animal's range. VIA WIKIPEDIA