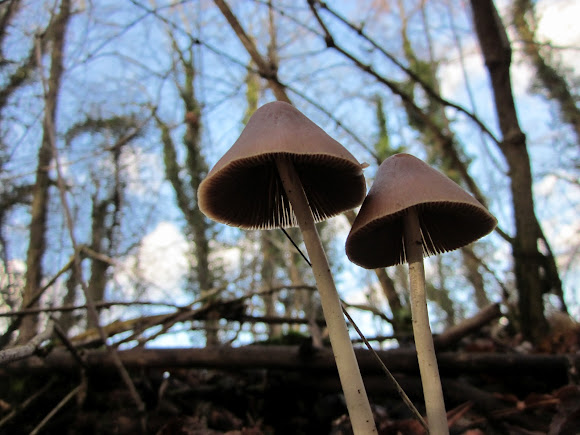 Seen when they are moist after rain and glistening in the sunshine, a group of fresh Conical Brittlestems makes a truly wonderful display, grouped as they invariably are on compacted layers of twigs or buried wood of deciduous broadleaf trees. Like so many hygrophanous mushrooms, once the caps have dried they lose their lustre and become matt and much paler. The tall, straight stems are helpful identifying features of these 'little brown mushrooms' ( http://www.first-nature.com/fungi/psathy... )

In the BBC series "Wild Food", Gordon Hillman related an incident where he was accidentally given a sample of Psathyrella instead of edible mushrooms. After consuming the mushrooms, Hillman drank a glass of beer and suffered an adverse reaction, suffering blue-and-white monochrome vision followed by memory problems and breathing difficulties. Hillman recovered after having his stomach pumped. The looping memory problems Hillman experienced are similar to those caused by consumption of Amanita Pantherina (wikipedia) ( http://www.mycobank.org/MycoTaxo.aspx?Li... ), ( http://mushroomhobby.com/Gallery/Psathyr... )

You must have a picture of every mushroom in Holland! This is a wonderful collection. Well done!