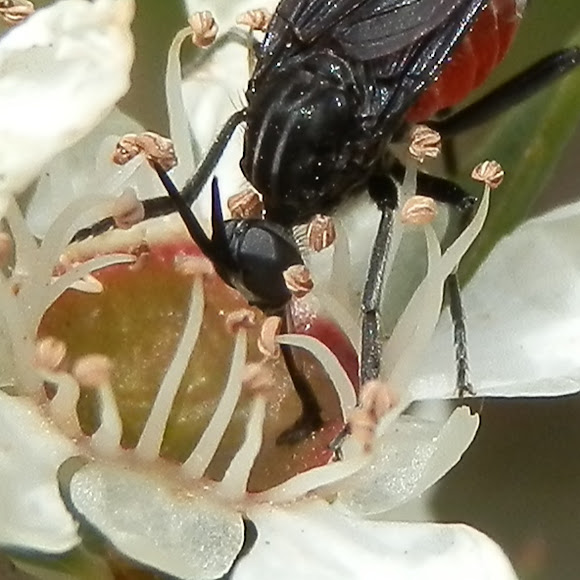 This was a very active fly about 5 or 6 mm long. Head and thorax were black and the thorax showed two faint thin white lines. The head had two short pointed black antennae that were either held straight up like horns (Pic 1) or slicked back as in pic 3.
A long proboscis was out lapping up the nectar on the flower disc (pic 1). The abdomen was a raspberry red with faint white lines. The last segment was black and the two anterior to this were white.
Legs were black and long. The wings were tinted black but plain.

My thanks to Stephen Thorpe and Tony D. for their help with identifying this fly.
Tony writes "A great find Leuba! Comes remarkably close to the female of Hardy's (1934) Apalocnemis sanguineus (Qld). That species has the wing dark suffusion more restricted basally. He mentions at the end of that description "a closely allied species" collected from Ringwood (Vic) which has "the wings suffused intensely over a larger area". Hardy (1934) : http://www.biodiversitylibrary.org/item/... Note that Hardy has that species in Empidinae but it is currently placed in Brachystomatidae."
We are not able to go any further than the family with the ID at this stage.

Thanks Christine. I love the antennae. Very lucky to have got any clear shots of him/her - did not settle for more than a few seconds.

Amazing looking fly. Hope we ID it even to family.