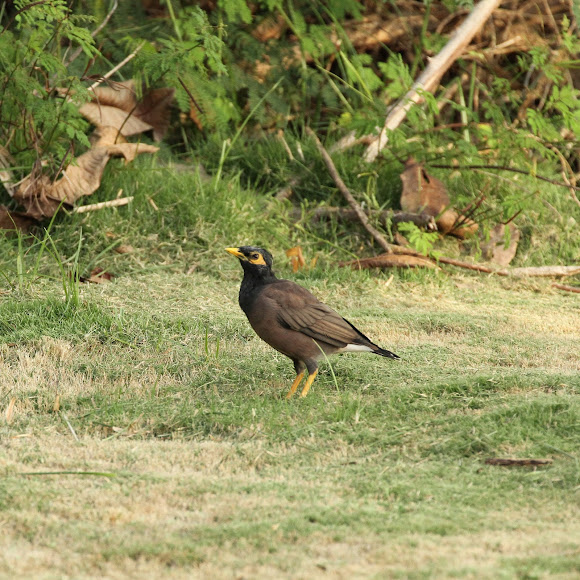 The common myna (Acridotheres tristis), sometimes spelled mynah, also sometimes known as "Indian myna", is a member of the family Sturnidae (starlings and mynas) native to Asia. An omnivorous open woodland bird with a strong territorial instinct, the myna has adapted extremely well to urban environments. The common myna is readily identified by the brown body, black hooded head and the bare yellow patch behind the eye. The bill and legs are bright yellow. There is a white patch on the outer primaries and the wing lining on the underside is white. The sexes are similar and birds are usually seen in pairs.

It is a species of bird native to Asia with its initial home range spanning from Iran, Pakistan, India, Nepal, Bhutan, Bangladesh and Sri Lanka; as well as Afghanistan, Tajikistan, Turkmenistan, Myanmar, to Malaysia, Singapore, peninsular Thailand, Indo-China and China. The myna has been introduced in many other parts of the world such as Canada, Australia, Israel, New Zealand, New Caledonia, Hawaii, South Africa, Kazakhstan, Kyrgyzstan, Uzbekistan and islands in the Indian Ocean (Seychelles, Mauritius, Réunion, Madagascar, Maldives, Andaman and Nicobar Islands and Lakshadweep archipelago) and also in islands of the Atlantic and Pacific Oceans. The range of the common myna is increasing to the extent that in 2000 the IUCN Species Survival Commission declared it among the World's 100 worst invasive species.