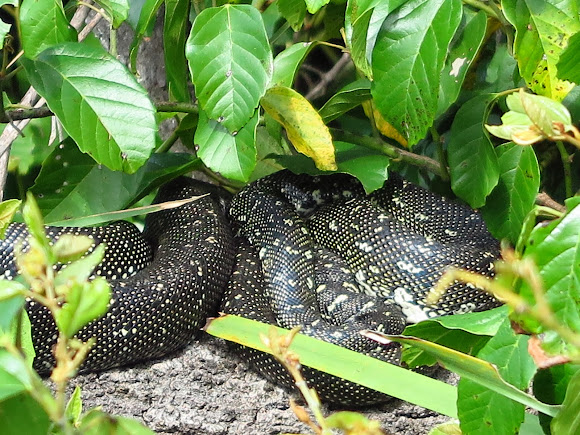 A subspecies of Carpet Python (Morelia spilota), popularly known as the Diamond Python. It is a medium-to-large snake, and the average adult size of this subspecies is usually between 2 - 3 meters. The diamond python's range is from coastal areas of New South Wales, where it gradually merges with the carpet python in the area north of Newcastle, and as far south as Victoria. The two subspecies will interbreed where they overlap. My first encounter with this species, and it was in the wild.

Found this python sunning itself on a log amongst thick vegetation, only meters from the sand dunes and beach of Maitland Bay in Bouddi National Park. Thick coastal heathlands and rocky outcrops are a favourite of this species, and Bouddi has plenty of that. http://www.environment.nsw.gov.au/nation...

This spotting was on the NSW Central Coast just north of Sydney. Thanks to PN Ranger MartinL for also confirming to me his spotting in North Central Victoria.

Thanks, Martin. That's good to know. Thanks for your clarification.

Hello Neil.
I have seen the carpet python at Mt Hope (Pyramid Hill) about three years ago. Only about 1m long. The locals were not surprised. This is North Central Victoria.

Thanks, Pam and Hannah. Lucky me, indeed :-)

Very pretty. Thanks for posting

I just stumbled across this one, Mark. You might be lucky too :-)

I would love to find one down here.

" It has a limited distribution range in Victoria, where it is regarded as rare and threatened by reduction in available habitat. Morelia spilota metcalfei is the only other related python in the state, and is recorded as hybridising with this subspecies.." - wiki

You do get them down your way then, Mark? Most sources say they're a localised species around coastal NSW, but others say they have a larger range. Nice if you do get them in VIC. Very cool snake.

Sleeping off a good meal I think. :) I was so pleased to find out we have them in Victoria too. Hope the numbers are holding up... certainly enough possums around for them.

That's why I reckon it's a 'she'. Too pretty to be a boy! Trouble is, every python I ever see I reckon is a female. I guess there has to be a male amongst them somewhere.

Thanks, Ashley. I felt so lucky to see this snake. I didn't want to get too close and disturb her, but she looked like a large adult... and a fatty. Lots of good eatin' in this park.

What a fatty! Congrats on the lifer, such a pretty snake :)