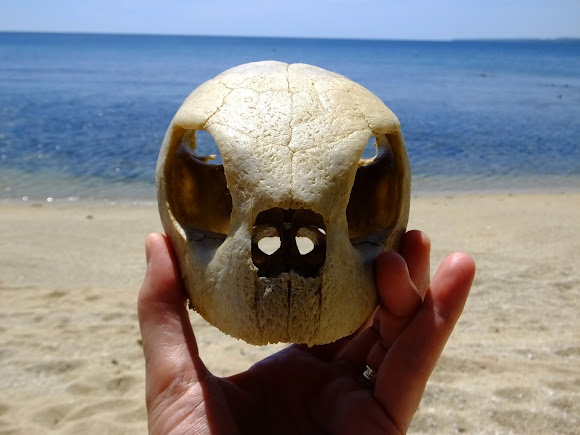 Skull, about 12cm in length. You can really see the cranial plates connecting.

At a dive site near Antulang, Negros Oriental, Philippines. At 25 meters deep.

First I thought I saw some fiberglass parts of a boat that had sunk a week before around this site. There were all this plates of white/yellowish material and the shapes were kind of mathematical, rectangular with pointy things sticking out, weird! But then I saw the skull! I saw the back of the eye sockets and did recognise it immediately as non human. I saw large bones lying around as well. Like leg bones. I did not realise what it had been until we picked up the skull, turned it around and a turtle was looking back at us. AWESOME. There was no sign of entanglement or stress. We don't know how he/she died. There was no more meat on the bones. And everything looked complete for as far as we could see. There had been a typhoon a few weeks before, so could he have smashed against the coral and died that way? Unfortunately this was my last day of the dive holiday, my camera ran out of battery and I could not return to this dive site later. The guide decided to take the skull and keep it. After I took the pictures on land, he put it in a bucket of bleach to clean and keep.

Hi James McNair and MariadB thanks!

By the shape I would say a Hawksbill Turtle

So sad. I hope it wasn't a turtle

It was in the Osteology mission already :-)

Ok I'll look it up. Thanks!