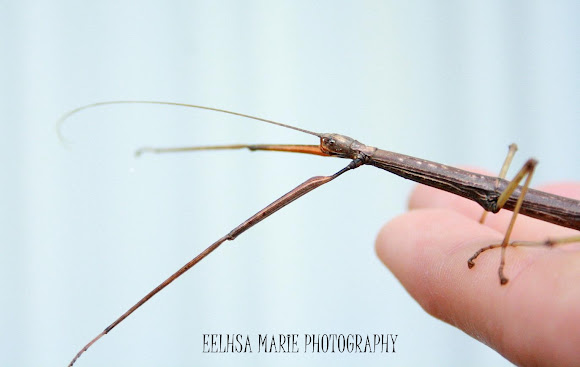 The Northern or Common Walkingstick is found across North America. Females can grow up to 95 mm (3.75 in.) and males can grow up to 75 mm (3 in.) Their antennae are approximately 2/3 the length of their body. Northern Walkingstick nymphs hatch in spring and mature over the summer and fall months. They mate sometime in late summer and early fall, and afterward the female lays her eggs on the ground, one at a time. The main predator of Walkingsticks is birds. Other predators include lizards, mice, squirrels, and mantids.

The Northern Walkingstick lives in deciduous forests across North America. They feed on the leaves of a variety of trees and plants, such as: Sassafras, Black Cherry, Black Locust and clovers, but prefer oak and hazelnut.

I found this particular Walking Stick on a shrub right next to a building. I also observed two males, probably present because of the female. While the female stayed very still and sat on my hand for awhile, the males where quite actively and moving around. Several days later this female was observed in the same area mating with a male. Although we apparently have these insects where I live in Ontario, I don't recall ever seeing one before.