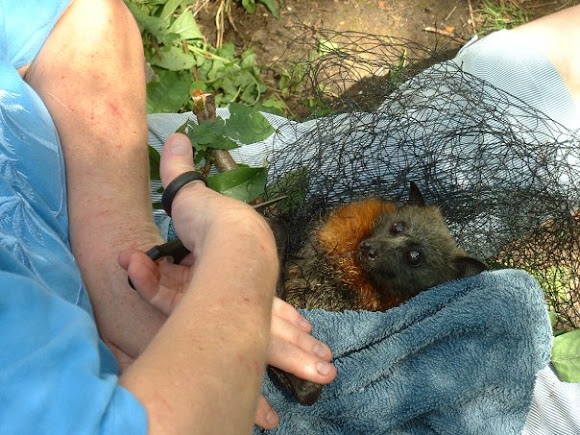 This photo is of a rescue of an adult Grey-headed flying-fox which had become entangled in netting. This type of netting that is loosely draped over fruit trees is an unintended trap for bats, birds and other wildlife. Although these animals are listed as threatened species, the Queensland Government still issues permits to shoot and harass Flying-foxes.

These flying foxes are found along the east coast of Australia from southern Queensland through to southern Victoria. It appears that their range is slowly shifting southwards.

Flying foxes with severe wing damage from entanglement in netting or barbed wire may have to be put down. This one was lucky. She was one of 9 rescued from the same tree that day, and she was released a few weeks later.

Her eyes are expressing Gratitude! Thanks Steve !!

I love you and all you are doing do help these beautiful species!

@akereemo245 That was one of the few from that day which was safely released.

You're a good man with a big heart. I respect you and honour your efforts. I honestly don't know if I could do what you do. I'm pretty sure I would simply cry myself to death, and that would be the end of me... but I do what I can in my little world to help those in need around me. I hope that adds some light to the light.

Thanks Neil, I was involved in rescuing 300 bats on the 8th and 18th January this year. By the end of the day several humans were also suffering heat exhaustion. We lost more than we could save, but we did everything we could. We have only just released some of the flying-foxes that were rescued in January.

LOL Now that's one way to get a photo. I hear what you're saying though, Steve. They are threatened because of this sort of practice, and because of habitat loss. I've been keeping an eye on a large colony at North Avoca on the NSW Central Coast, and it has been growing steadily over the past couple of years, but these may have been the same bats that were forced to leave the Botanical Gardens in Sydney. Who knows? It doesn't stop the odd redneck from taking pot-shots at them either. That can be so traumatic for the entire colony, particularly if the kill the older bats at the perimeter of the colony. The recent heatwaves in Sydney where the older and younger bats die from heat stroke. It just breaks my heart. The Queensland Government is an infected animal. Please don't get me started on them. A great spotting and excellent info highlighting the plight of these beautiful animals.