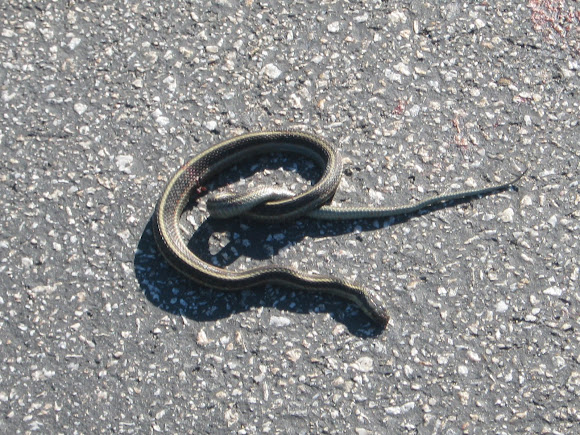 A medium-sized slender snake with a head barely wider than the neck and keeled dorsal scales. Some scale averages: Average of 8 upper labial scales, occasionally 7, scales 6 and 7 are enlarged, higher than wide. Average of 10 lower labial scales. The front and rear pair of chin shields are equal in length. The internasals are wider than long and not pointed in front. Average scale count at mid-body is 21, rarely 19.

The species Thamnophis elegans - Western Terrestrial Gartersnake, ranges widely from the California coast north through most of northern California, Oregon, Washington, Idaho and Montana, into Canada, including Vancouver Island, British Columbia, Alberta and Saskatchewan, and east into the states of Wyoming, Colorado, Utah, Arizona and New Mexico and just barely making it into South Dakota, Nebraska, and Oklahoma. Many isolated populations exist, including those in the San Bernardino Mountains and one in Baja California Norte, Mexico (the San Pedro Martir Gartersnake.) This subspecies, Thamnophis elegans terrestris - Coast Gartersnake, occurs along the Pacific coast from southern Oregon to Ventura County. Most range maps showing subspecies of T. elegans, show T. e. elegans occuring in the Central Valley near Lodi. I show T. e. terrestris there based on the bright red snake from Lodi seen above, although I have not seen other examples from the area. A range of intergradation is traditionally shown running the length of the Sierra Nevada mountains, but I am not certain exactly where or how wide it is.

While heading home from Wilder Ranch I spotted this little guy on the pavement, sad to say it did appear as though he was hurt.