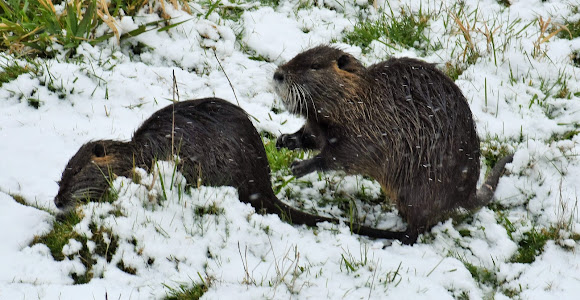 This isn't muskrat love, but nutria love. This mating pair of nutria (more appropriately known as coypu) differentiate themselves from muskrats by several ways in appearance: may reach a maximum of 20 pounds, mature adults are about two feet long, muzzle is covered by white coarse hair, tail is hairy and round (not compressed from side to side) and pointed at the tip, hind legs are much longer than the front legs, giving them a hunched appearance when on land, hind feet are webbed, large incisors are yellow to orange-red.

Spotted these large playful, herbivorous and semiaquatic rodents in a grassy wetland next to a long flooded ditch at the Ridgefield National Wildlife Refuge. The female while being somewhat submissive was more interested in eating, while the male seam to have something else on his mind. Their den was probably close by, is often made of floating platforms up to three feet high that they make from aquatic vegetation or they burrow in vegetated banks near waterways and collapsing banks and road beds.

Originally native to subtropical and temperate South America, it has since been introduced to North America, Europe, Asia, and Africa, primarily by fur ranchers. Although it is still valued for its fur in some regions, its destructive feeding and burrowing behaviours make this invasive species's endurance controversial to human occupants throughout most of its range. Their creation of "eat-outs", areas where a majority of the above- and below-ground biomass has been removed, produces patches in the environment, which in turn disrupts the habitat for other animals and humans dependent on marshes.

Thanks Ashley for the nomination.

Thank you for you comments Hema and maplemoth.