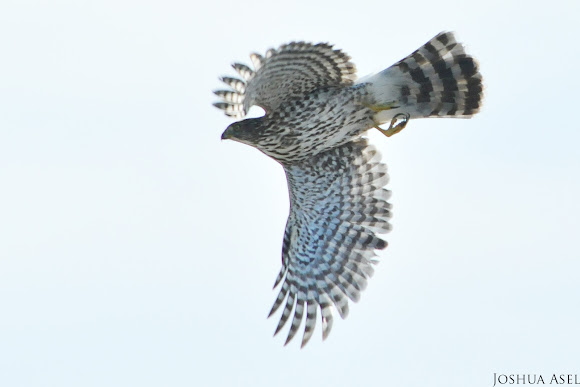 The Cooper's Hawk looks very similar to the Sharp-shinned Hawk, but is much bigger. In in-flight patterns, look for short bursts of heavy flapping followed by, relatively, long periods of gliding. The Sharp-shinned flies with more continuous and rapid flapping, also is incredibly aggressive towards any other raptors, especially their own kind. Same as the Sharpies, the Cooper's hawks eyes are yellow until they reach adulthood, then they turn a vivid red. Their tail also is curved at the end with feathers getting shorter as they approach the outside of the tail.

I caught this beautiful specimen taking off after it was perched on a telephone poll, scoping the scene for "feeder" birds. If you hear a chain reaction of groups of birds chirping their brains out, look for a bird killer like the Copper's Hawk acrobatically maneuvering through the trees-honing in on it's prey. It's a spectacular spectacle in the animal world.