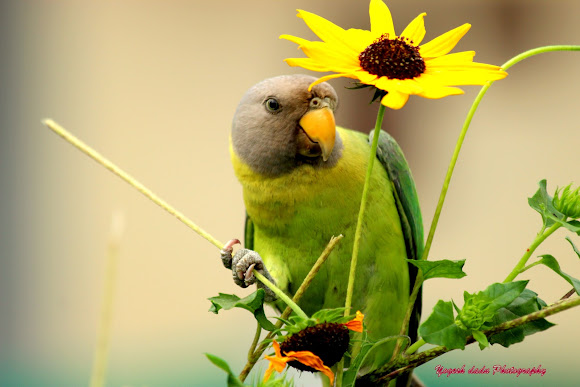 The Plum-headed Parakeet is a mainly green parrot, 33 cm long with a tail up to 22 cm. The male has a red head which shades to purple-blue on the back of the crown, nape and cheeks while the female has blueish-gray head. There is a narrow black neck collar with verdigris below on the nape and a black chin stripe that extends from the lower mandible. There is a red shoulder patch and the rump and tail are bluish-green, the latter tipped white. The upper mandible is orangish-yellow, and the lower mandible is dark. The female has a dull bluish grey head and lacks the black and verdigris collar which is replaced by yellow

The Plum-headed Parakeet is a bird of forest and open woodland. They are found from the foothills of the Himalayas south to Sri Lanka. They are not found in the dry regions of western India. They are sometimes kept as pets and escaped birds have been noted in New York, Florida and in some places in the Middle East.

Congratulations Yogesh, it must be spectacular to see these in the wild!

WOw so beautiful ! Congrats on the SOTD ! :)

Beautiful portrait of a beautiful parakeet! Congratulations on the SOTD!

Congratulations Yogesh, your colorful plum-headed parakeet is our Spotting of the Day!