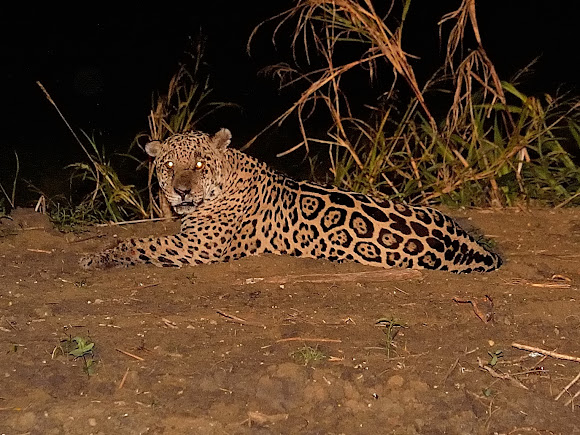 The jaguar (scientific name: Panthera onca) and black jaguar (in the case of melanic individuals only), is a species of carnivorous mammal of the Felidae family found in the Americas. It is the third largest cat in the world, after the tiger and the lion, and the largest in the Americas. Resembles the leopard physically, if this differs, however, the pattern of spots on the skin and the larger size. The characteristics of their behavior and their habitat closer to those of the tiger. It is found mainly in tropical areas, but is also found in more open environments. The jaguar is strongly associated with the presence of water and is notable, along with the tiger, as a feline that enjoys swimming. It is usually solitary. It is an important predator, playing a role in stabilizing ecosystems and regulating the populations of prey species. Has an exceptionally powerful bite, even relative to other big cats. This allows it to pierce the hard shell of reptiles such as turtles and use an unusual killing method: it bites directly through the skull of prey between the ears, a fatal bite to the brain.

The jaguar's present from Mexico, through Central America to South America, including the entire Amazon basin in Brazil. The photos were taken in a large area of ​​rice fields surrounded by forests at San Francisco Ranch (www.fazendasanfrancisco.tur.br) located in the southern Pantanal of Brazil in the state of Mato Grosso do Sul. Pantanal is flooded an extensive area of 250 km ². The vegetation is constituted by steppe savanna. Planting rice attracts birds and small animals. Consequently also attracts predators. The animal shelter is ensured by two ecological parks and an extensive riparian zone of the Miranda river protected by environmental laws. The Ranch has an excellent structure to serve the tourists with accommodation, food and photographic safaris. We stayed for 4 nights and got the jaguar sighting in two consecutive nights. We took photos from inside a specialized vehicle for photographic safari. The jaguar was 30 yards away on the other side of an irrigation canal. It was very exciting. Focusing was performed with the vehicle spotlight. We turn on the lights of the cameras also help to focus the photographs.

A belated congratulations Cassio, you have a treasure trove of spottings !

Congrats on spotting of the day you totally deserve it!! I have seen your work it is awesome!!
:)

Wow,awesome Cassio,a real Jaguar in the wild,congrats on the well deserved SOTW and thanks for sharing

Cassio, congratulations! This series was chosen as our Rangers' Spotting of the Week! Your photos and the details behind the experience make for an incredible story and we are lucky to have had you share it with us! Congrats again and thanks for giving us the change to live this experience with you.

Wonderful photo and experience. Pantanel is on my bucket list.... maybe next year!

Thanks for this natural spotting of this wonderful creature and for the great notes.

What an exciting experience that must have been! The jaguar has the strongest bite of any wild large cat - even more so than the tiger and lion. They are awesome animals; I've only seen one close up in a rescue sanctuary. Very cool spotting.

What an absolutely phenomenal spotting. This is hands down the best spotting within the last week at leats. FACT.

Thank you Cassio Corradi! What a wonderful amount of info. No doubt our community will enjoy reading these details.

Look at the new information provided.
Thanks.

Thanks for your efforts CassioCorradi! Please note that we're interested in information specific to your encounter with this jaguar, rather than generic information. For generic information you can use the reference fields. For example, here's what our faq page says about Habitat: "Habitat: Please state the actual habitat where you photographed the spotting - this information can then be used to track changes in habitat, such as those caused by human intervention or habitat destruction. Again, it is not necessary to state published habitat information here, this can be referenced in the 'reference links' box". I hope this makes things clearer :-)
http://www.projectnoah.org/faq

Hi CassioCorradi! This is an awesome spotting. Could you please provide some information with your spottings, and fill in the Habitat field. You can check out our FAQ page for guidance on how to fill in the various fields.
http://www.projectnoah.org/faq