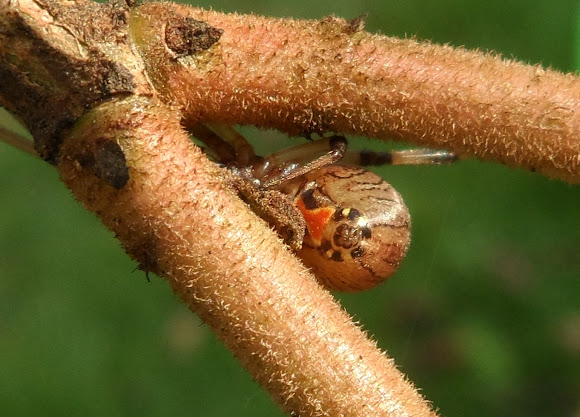 Latrodectus geometricus, commonly known as the brown widow, grey widow, brown black widow, house button spider or geometric button spider, is one of the widow spiders in the genus Latrodectus. As such, it is a 'cousin' to the more infamous. L. geometricus is slightly smaller and generally lighter in color than the black widow species; the color can range from tan to dark brown to black, with shades of grey also possible. Like the black widow species in the United States, L. geometricus has a prominent hourglass-shaped marking on the underside of the abdomen; the brown widow's hourglass, however, is usually a vivid orange or a yellowish color. Unlike the black widow, L. geometricus has a black-and-white geometric pattern on the dorsal side of its abdomen. Although the Latin name comes from this pattern, a spider's coloring can and does darken over time and the pattern may become obscured. Also, they have stripes on their legs. Brown widows are often preyed on by mud daubers and sometimes by digger wasps. Brown widows can be located by finding their egg sacs, which are easily identifiable. They resemble a sandspur, having pointed projections all over, and they are sometimes described as "tufted", "fluffy", or "spiky" in appearance. Eggs hatch in approximately 20 days. Female brown widows "lay about 120-150 eggs per sac and can make 20 egg sacs over a lifetime." Like all Latrodectus species, L. geometricus has a neurotoxic venom that, drop for drop, is as toxic as the black widow's. However, brown widow bites are usually not very dangerous; usually much less dangerous than the black widow's. The effects of the toxin are usually confined to the bite area and surrounding tissue, unlike the black widow's. Mere toxicity of the venom is not the only factor in dangerousness. Brown widow bites are minor compared to black widow bites, because they cannot deliver the same amount of venom as the black widow. The LD-50 of L. geometricus venom has been measured in mice as 0.43 mg/kg., and separately again as 0.43 mg/kg (with a confidence interval of 0.31-0.53).