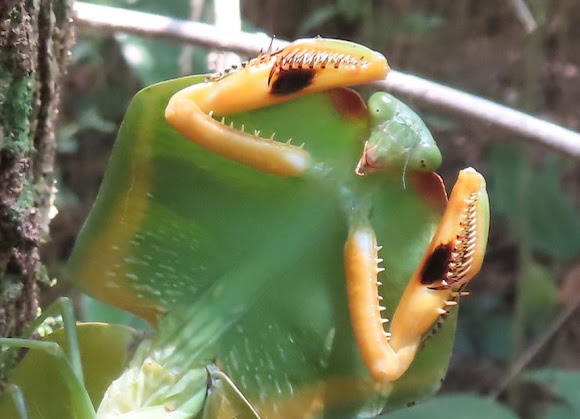 Also called the Leaf Mantis or Hooded Mantis, these Mantids are really cool. They have made a fine art out of mimicry looking so much like the surrounding greenery of the jungle in which they are found, that it is almost impossible to see them if they don’t move. This one was nearly 3" (7.5 cm) long, dark green dorsally, lighter green ventrally including the 4 rear legs. The front legs were yellowish orange with a black spot on each of its femurs.

Found on the edge of the clearing behind our house in the Amazon rainforest of SE Ecuador (700 masl).

The first picture was an unexpected end to a spotting. I assumed I would eventually lose sight of it, but after following/chasing this Mantis around for a while, it evidently decided it had had enough. As I got just a little too close, it suddenly popped out from the tree trunk and assumed its most fearsome pose. You can almost see the biceps bulging as it strikes the traditional strong-man pose. It even had its mouth open, as if to say, “You want some of this?” In fear and trembling I took my pictures and sneaked away 😊

What a cool mantis series! I haven't seen a mantis do anything at all similar before and what an interesting series! Could I share the first photo on my Facebook page or would you rather not have shares?

Thanks Leuba. It remains my most unexpected wildlife pose.

Wow ! Never seen one of these before ( I mean pictures). Just fantastic and I love the threatening pose. So glad you got these lovely shots and thanks for sharing Tukup.

Thanks Neil. I've seen a lot of mantids but never a display like this one. Very cool.

How did I miss this one? What an amazing creature! I think that tough posture would have scared me off too! Thanks for sharing this wonderful encounter, Tukup :)

Thanks Watson5. In quarantine for Covid-19 with no internet so just seeing this. I saw today this was nominated for SOTW. I've never had one of those.

Watson5 a year ago

Amazing pics as always Tukup! We really appreciated the camouflage ability this mantis has. We're glad you continued to "follow" the mantis to get that incredible ending shot!

Thanks Zlatan. Karate Kid was my thought too. Everything but the AIIIIIII-YA!!

Karate Kid - Alien? Great series of pics and notes, Tukup, thanks for sharing. That first click is really exceptional in my eyes...

Thanks sunnyjosh. A great opportunity for me.

Thanks Mark. It did seem like it had run as far as it was going to.

Amazing beastie and great series. It was certainly willing to take you on I think ha ha.

I'm glad I kept my distance then 😊. From the looks of the gut in Foto #2, I don't think it was starving. Thanks Jae.

:) Yeah most of the praying mantises I've seen were quite aware of their surrounding. Here is an interesting excerpt from an article on this subject I read the other day:
"The degree of responsiveness of a mantis to prey is dependent on its nutritional state. As starvation proceeds, a mantis will become aware of and stalk prey moving at greater distances from its body, will stalk more quickly and will strike at larger prey."

Gracias Eulalia. It looked like it was right out of Karate Kid 😊

eulalia rubio a year ago

Thanks Mel. Normally I follow/chase insects in the jungle only to lose them before I can get a good shot. This spotting was really special.

Thanks Sukanya. It reminded me of the pose the Brazilian Wandering Spider shows when threatened https://www.projectnoah.org/spottings/42... .

That is an absolutely amazing spotting in all ways, Thank you so much for dedicated tracking and sharing Tulip.

Loved your notes, Tukup. Spunky insect too! Not afraid to take on humans :)

I was surprised at its quick move. Surprised and pleased that he/she held it for a long time. If I moved away it relaxed a little, if I came back it sprang back out. Really cool. Thanks Jae