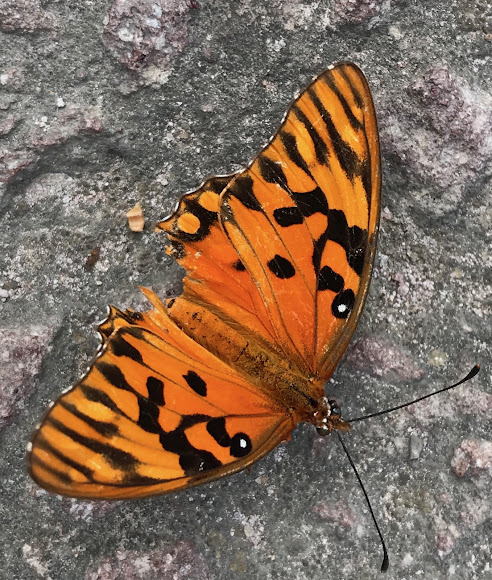 In its adult form, the gulf fritillary is a medium-sized butterfly that has extended forewings and a wingspan range of 6.5 to 9.5 cm. This butterfly exhibits sexual dimorphism as females are typically distinctively larger in size than males. The underside of the wings is brown and speckled with silvery white dots. In contrast, the top surface layer of the wings is deep orange in color with black streaks running across. In addition to the size difference between the two sexes, females are usually darker in color and are more marked with black streaks as compared to the males.

Windewardside at the foot of Mount Scenery, a volcano on Saba in the Caribbean Sea.

This little one was sitting in the road so I picked it up and put it on a plant at the side of the road. When I returned a few minutes later it was sitting in exactly the same spot on the road again! Very strange. It has damaged wings. I picked it up again and put it somewhere safe again. From there it flew away further into the bush. Very interesting fact... Defense against predators Both male and female gulf fritillaries possess certain defensive glands located on their abdomens that serve as a defense mechanism against predators, especially avian predators such as birds. When the butterflies sense danger in the area or are suddenly disturbed, these glands emit a distinct and obvious odor which is composed of several different types of chemicals, such as 6-methyl-5-hepten-2-one and hexadecyl acetate. The summation of these chemical compounds released from the glands leads to birds preferentially avoiding the gulf fritillaries in favor of other prey.