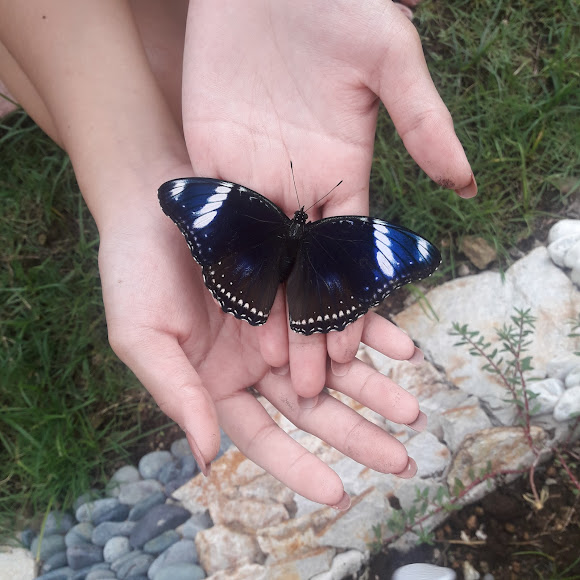 Hypolimnas bolina - is a black-bodied butterfly with a wingspan of about 70–85 millimetres. It is a fairly common butterfly found in lightly wooded country, deciduous forests, thick and moist scrub, and the greener parts of human habitats. The upperside of the male wings is jet black, offset with three pairs of white spots, two on the forewing and one on the hindwing. These spots are surrounded by purple iridescence. In addition, the upperside of the hindwing bears a series of small white dots. The upperside of the wings of the female is a brownish black and does not have any spots like those of the male. The edges bear white markings which are similar to those of the common Indian crow.

This is a male Hypolimnas bolina which are commonly known as the great eggfly, common eggfly or the blue moon butterfly.

A stunning butterfly! These habitat notes are very detailed and helpful!

Thank you for sharing with the community :)

Hello Loux,
Welcome to Project Noah. This is a site dedicated to wildlife; so you can share photos that you have taken of wildlife and engage with the PN community. Please do not take photos from the Internet or from others without permission. Please also try not to post photos of your pets or other domesticated animals.
You have a nice first spotting. Do write something in all the boxes especially where you saw it (Habitat) not just about its range.
If you do not know the ID of other spottings you may go on to post, I am sure someone will be around soon to help you ID the spotting. In case you agree with the suggestion, you can use the Edit this Spotting Option to fill in the boxes and complete the spotting.
Enjoy the site. Keep posting. Have fun. See you around.
Welcome, again.