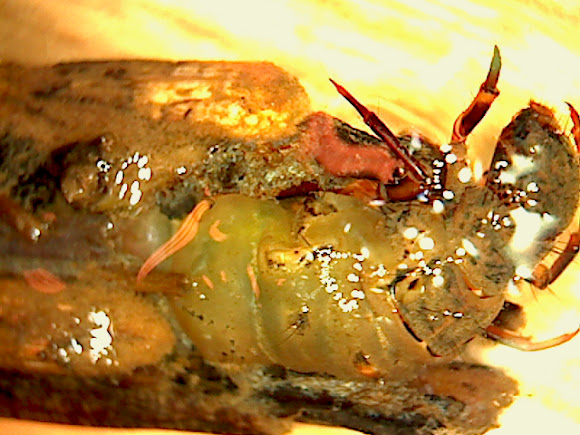 Head has a thick hardened skin; antennae are very short, usually not visible; no wing pads occur on the thorax; top of the first thorax always has a hardened plate and in several families the second and third section of the thorax have a hardened plate; three pairs of segmented legs attach to the thorax; abdomen has a thin soft skin; single or branched gills on the abdomen in many families, but some have no visible gills; pair of prolegs with one claw on each, is situated at the end of the abdomen; most families construct various kinds of retreats consisting of a wide variety of materials collected from the streambed.

Caddisflies are found in a wide variety of freshwater habitats, especially creeks, Ceraclea sp. larva in case rivers and wetlands. Foods of larval caddisflies vary from algae and coarse plant particles to other invertebrates. The larvae themselves serve as an important food source for a variety of fish. Caddisfly larvae are well known for their construction of cases, nets and retreats. The design and composition of the cases and retreats is dependent on the ecological niche of each species. Trichoptera families are usually categorized according to which type of retreat they build. Cases and retreats are composed of silk which the larva emits from a specialized mouthpart (the labium) and often incorporate sand, vegetation, and rock fragments. Characteristics of Larval Trichoptera As members of the insect Order Trichoptera, caddisflies have four life stages: egg, larva, pupa, and adult. In most families, the female deposits eggs in or above water, and the eggs of Family Polycentropodidae can actually survive dry conditions. The larva of most caddisfly families undergoes five stages, or instars, before fastening its case to a solid substrate when entering the pupal stage. Generally, the pupa emerges as an adult after two or three weeks. http://www.dnr.state.oh.us/LinkClick.asp...