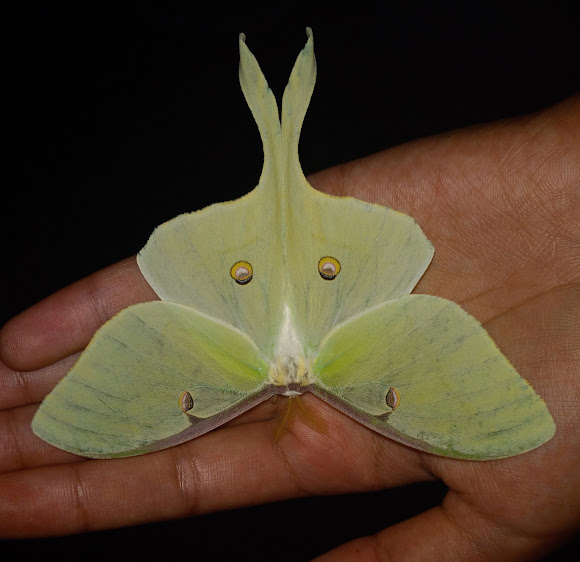 The Luna moth is a large moth in the family Saturniidae. The moth has light lime green wings, which are broad and rounded. The design consists of a brownish purple costal vein, which leads a triangle marking to two long shaped eye spots. The forewing also has a light tan stripe, with the hindwings having just two moon shaped eye spots, which consists of many color layers,. The wingspan for the moth was about five inches, or a little more. Not to forget the three inch long spiraling tails, which are also light green in color.

Osage Beach Missouri. A Oak Hickory forest near edges of the Mansfield Forest State Wildlife Management Area. Attracted to a Mercury Vapor light at night around 3 AM. The habitat consists of Walnut, Hickories, and Oaks mainly. The second picture shows the forest where it came from.

The Luna moth is a very sensitive moth, in where parasitic wasps, and flies are easily able to bring the population down in some areas. The two nights we did our lights traps there were two of them, (one per night). Seems to be sensitive even after it dies, as dried specimens. If a Luna moth specimen is kept for some time under light it can fade completely to white. It can happen as fast as only an hour before it starts to fade. This seems to occur with most animals this color, like the tropical leaf insects from South East Asia. here are some examples of this issue, (https://manitobamuseum.ca/luna-moth/). The Luna moths distribution ranges from east of the Great Plains in the United States, Florida to Maine, and from Saskatchewan eastward through central Quebec to Nova Scotia in Canada. The larval food plants for this species are hardwood trees, such as Betula papyrifera, Diospyros virginiana, Liquidambar styraciflua, Carya sp, Juglans sp. , Rhus, among others, like Pecan. The tails of these Saturniid moths are a anti Bat defense strategy. Bats use echolocation to fins their prey, which means that they send waves which bounce back at them so they can navigate. The Luna moth has tails, which when flying move crazily, which allow the bat to not see it's prey clearly.